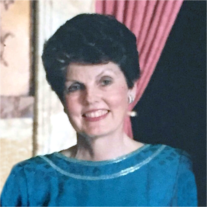 On January 18th, 2016 Lauris Elaine Esser, 81, passed away at the Villiagio at Capriana Memory Care Facility in Brea, California. Lauris was born in Chicago, Illinois January 22, 1934 to Dr A. Vincent and Asaleen Gerty. Shortly after her birth the family moved to La CaÃ±ada, California where she attended Mayfield Grammar and High School in Pasadena and then went to Rosemont College. She transferred to the University of Southern California for her final two years where she also joined the Delta Gamma Sorority. In 1956 she married Edward Walsh Jr. and they had five children that they raised together in San Marino. An active member in church activities at Sts. Felicitas and Perpetua Church where her children attended school, she was also the Little League score keeper for her boys’ baseball games. While her youngest daughter attended the St. Joseph’s Institute for the Deaf in St. Louis, she would host the staff during their summer vacations and arrange travel for them throughout Southern California. She was a passionate advocate for the integration of deaf students into the school system and her youngest daughter was one of the first two deaf students to attend San Marino High School. After moving to Irvine she became an active member of the Irvine Newcomer’s Club where she built friendships that lasted for the remainder of her life. In 1990 she married her high school sweetheart, Conrad Esser. She and Conrad were active in the Bereavement Ministry at St Edward’s the Confessor’s Church. They made several trips to Lourdes with the Knights of Malta escorting the sick to the healing waters and providing spiritual comfort to those who traveled there. One of the greatest joys of her life was becoming a Dame of Malta in the Catholic Church.

There will be a Rosary Sunday evening January 31st at 6:00 PM at the O’Connor Mortuary Chapel, 25301 Alicia Parkway, in Laguna Hills. A Funeral Mass will be held Monday, February 1st, at 12 Noon, at St. Edward the Confessor Church, 33926 Calle La Primavera, in Dana Point.

For me the final hour has come and we shall never see each other again. But he who rewards his followers will unite us again in heaven. I see tears in your eyes, why weep now? Take heart for I die joyful. – Act 4 Verdi’s Don Carlos