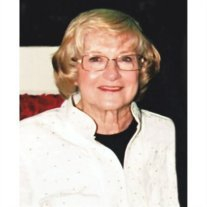 Laura Margaret (Midge) Pfeiffer, age 88, passed away peacefully Monday, April 8, 2013 in Rancho Santa Margarita, CA. Midge, as she was affectionately known, was born August 13, 1924 in Inglewood, CA. The daughter of Clarence and Sadie Barnard, she was a 1941 graduate of Inglewood High School, Inglewood and Woodbury Business College in Los Angeles.

She was preceded in death by her husband, Dick Pfeiffer; her parents, Clarence and Sadie Barnard; and her sister, Betsy Haneline.

In addition to being a devoted mother of five children and a skilled homemaker, she also helped her father as caregiver for her mother until her death. Midge had many talents, playing the piano from the age of four, and as a seamstress and a talented artist, painting in all mediums. She always kept up with the latest in fashion and decorating. She and Dick enjoyed many wonderful vacations to the Caribbean, Hawaii and the eastern seaboard. After his death Midge continued to travel with her girlfriends, cruising through the Panama Canal, taking a Tauck fall leaf tour from Boston to Quebec and a two-week trip through Europe. Midge loved entertaining family and friends. Many of these last few years she co-hosted a Christmas Cocktail party with all her pals from Inglewood.

As a wife, mother, grandmother and great-grandmother, she will be remembered as a loving, giving person with a wonderful sense of humor and wit. She always put her family first. Our mother leaves us with memories of a lifetime filled with fun.