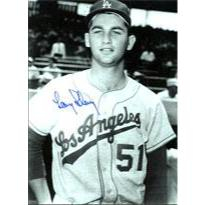 In 1959, Larry Sherry became a household name in Los Angeles as a result of his World Series heroics. He was the winning pitcher in the fourth and sixth games and won Series MVP honors. Larry had a 53-44 lifetime record with a 3.67 ERA in 400 relief appearances and 16 starts. He pitched for the Dodgers from 1958-63, and he later played for the Detroit Tigers, Houston Astros and California Angels before retiring in 1968. He had a career-high 20 saves for the Tigers in 1966.

Larry was dearly loved by many and will be deeply missed by his family and friends.