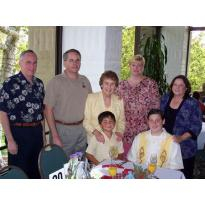 Palmdale resident, Larry Patrick Keating died at his home on Sunday, February 27, 2011 due to melanoma cancer. He was 51 years old. Larry is survived by his wife, Patricia; his son, Kevin; his daughter, Meari; and a large extended family that includes his mother, Jean; two brothers, Kevin and Brian; two sisters, Ann and Kim; as well as his father-in-law, Donald Farrell and his brother-in-law, Edward. Larry spent a significant part of his childhood growing up in Garden Grove where he enjoyed swimming at the beach and being active in the Boy Scouts of America.

Larry worked as a software engineer in the aerospace industry for 31 years. In 1998 he joined Lockheed Martin Skunk Works and in 2007 was awarded Lockheed Martin’s highest honor, the Nova Award. He was again recognized by Skunk Works in 2010 for his important contributions as an ‘inventor, leader, mentor and friend.’ Prior to 1998, he worked for Rockwell-Boeing. He was also a part-time instructor at Antelope Valley College in their computer science program.

Larry loved life and people and livened every occasion with his quick wit and humor. An athlete and outdoorsman, he enjoyed backpacking, climbing mountains, running marathons and participating in Iron-Man triathlons. He loved every challenge. He had a gift for building as well as creating beautiful works in wood.

Services will be held on March 18, 2011, 11:00 a.m., at Corpus Christi Catholic Church in Aliso Viejo, California with interment following at Ascension Cemetery in Lake Forest. Donations can be made towards Melanoma Research in his name at:

Please include his name so that the money is designated towards Melanoma Research and they will let Patricia know that a donation was made on his behalf.