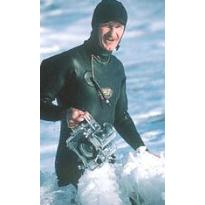 Larry ‘Flame’ Moore was a pivotal figure in surf photography, for both his style and longevity.

As a photographer and editor at Surfing Magazine for more than 30 years, he changed the sport’s traditional images — from artsy, lifestyle photos then to the bright, front-lit moments of action and drama seen today in other sports. That, in turn, has showed surfers as athletes and allowed the industry to boom around its marketable stars.

The Dana Point resident, whose battle with brain cancer challenged his time but not his enthusiasm, received the lifetime achievement award during the Waterman’s Ball 2005, the surf industry’s annual fundraiser for environmental causes.

Q. When you started out in 1970 and you were living in a trailer, did you want more than anything to not only get the shot but to get the job?

A. The job chose me. It was never something where I sat back and thought, ‘Wow, if I stick this out, it could be a great, endless career.’ It was the best of both worlds. Here I was shooting and training the next generation.

Q. Did you shoot surfing because you were a surfer?

A. I started as a surfer and that’s one of the things you can say about the photographers we’ve had who have been really successful. They paddled out and they saw what was going on in the water. They saw the shot before they started taking pictures and they knew what they wanted to capture on film.

Q. What were you looking for when you first started shooting?

A. I think the obvious goal was to get published. I don’t think there’s any greater joy than to see your work in print. Then there was definitely a progression to finding the so-called ‘Larry Light,’ the front-lit, razor-sharp action photo. Instead of shooting into the sun, shooting with the sun at your back.

Q. I’m curious how that style became yours.

A. When you want good reproduction, you come up with good light. You don’t shoot into the sun with a shadow, you shoot with the sun at your back. And I was constantly being barraged by the production director and the color guys — ‘Come on, I want to see that front-lit stuff.’

Q. So you wanted that photo done in the camera. It didn’t need to be worked on in the darkroom to become brighter, sharper or better?

A. In California we face months of overcast. One of the things I pioneered was building a flash in a water housing so I could swim out there and get light on my subjects. Or else find a place where the sun shines down the wave in the afternoon, like Trestles. I was always looking for those places that had sun. Those that didn’t, I used the flash. And eventually I would push my guys to do the same thing.

Q. And the tight shots?

A. That allowed better quality, again. You didn’t have to blow the image up. Much more defined.

Q. Do you feel like you’ve shaped the way people see surfing?

A. Yeah, I do. I’m not a spotlight kind of guy, but I tell my guys that if you work hard, the rewards will come. But I view Cortes Bank as my peak. I invested 10 years of my life in it. We flew out there 24 times to nail the right conditions. It was a lot of work to have it come to fruition. And in my mind, the 100-foot wave does exist and it’s right there.

Q. You’re known as a pretty industrious guy, so when you learned you had cancer how did it affect things?

A. Sure, I wish that I didn’t wake up with a Grade 4 tumor in my head. But at the same time, I do feel that the Lord not only has a plan for my life and been by my side in this whole process, but has given me 35 years of opportunities at Surfing Magazine, a phenomenal wife, a great son. Yeah, maybe the photography was cut a little short, but I’ve been so blessed.

Q. How would you prefer to be remembered?

A. There’s no doubt in my mind a man of deep faith is more important to me for people to know than the greatest surf photo I ever took.

Larry ‘Flame’ Moore died peacefully early in the morning of October 10 at his home in Dana Point, California. He is survived by his devoted wife Candy, and loving son Colin Moore.

In lieu of flowers or other gifts, the Moore family has started the ‘Follow the Light Foundation’ at Flame’s request. It’s a non-profit that will help enable young, aspiring surf photographers fulfill their dream. Make checks to the ‘Larry Moore Memorial Trust,’ and send to: