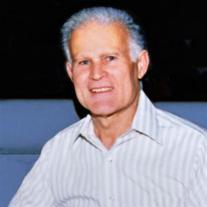 Larry Cucinella, beloved husband, father, brother, friend and well known El Toro barber was born on March 5, 1932 in Cinisi, Sicily. He died on May 20, 2012 in Lake Forest, California. He is survived by Rita, his wife of 34 years, by his sons Nick Cucinella, Bill and Jeff McCollam, his daughters Rosalie Hamman and Julie Jackson and 7 grandchildren. He is also survived by his brothers Matt and Joe and his sister Phyllis.

Larry was the oldest son of 7 children and grew up in Sicily where he went to school through the 5th grade, “graduating” at the age of 11 years. After that he went to work tending his family’s properties which included lemon groves, almonds, prickly pears, grapes and fig trees. World War II made life difficult in Sicily and the economy didn’t improve for a long time even after the war ended. So Larry’s father Nicolo decided to move the family to Canada, with the ultimate goal of becoming “Americans.” Larry was 18 years old when he boarded the boat for a new life.

Once in Canada, Larry went to work picking tomatoes for a dollar a day, eventually getting hired by a local farmer to help harvest his land. He saved his money diligently and was the first of the family to immigrate to America, landing in Detroit, Michigan in 1951 at the age of 19. At the time his occupation was “farmer” but he eventually landed a job with Ford in Detroit, making good money and a steady paycheck. He lived very humbly, renting a room and saving every penny in order to help bring the rest of his family to the United States.

Larry entered the Army in 1954 serving as a Combat Engineer and became Assistant Squad Leader. Upon completing his service of duty he took on brick and cement work for a time and then decided to become a barber. He attended LaMar Barber College in Highland Park, Michigan graduating in 1958 while continuing his service of the United States as an Army Reservist.

Larry married in Detroit a year later and had a son, Nicholas, born in 1960. The family moved to Escondido and Larry found work barbering, followed by a stint in Garden Grove when his daughter Rosalie was born in 1964. After that, Larry purchased and operated his own barber shop, Toro Barbers, in El Toro, California, right around 1966. Larry’s daughter Julia was born in 1973. In 1978 Larry married Rita Ann Finizza, caring for her sons Bill and Jeff as his very own.

Larry had a passion for bowling, gardening and meticulous hair cutting. He was a friendly and outgoing man who treated everyone with respect and consideration and was well known and loved particularly throughout the Lake Forest community. He will be greatly missed by many.