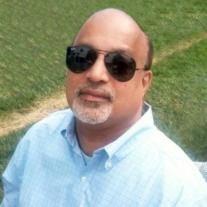 Lakshman Ganesan passed away on July 20, 2012. Despite living what some might consider a short life, he used his 52 years of living to their fullest. He was born in India in 1959 as the youngest of two sons. He moved to Mumbai, India in the 1980s. There he met and married his wife in 1985. They had two children and moved to live in California. Lakshman is a beloved son, brother, husband, father, uncle, grand-uncle and friend to those he leaves behind. He is survived by his mother, brother, wife and two children. He will be missed.