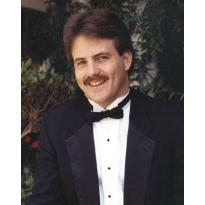 Kim Alexander Stewart, 51, unexpectedly passed away on Thursday, August 27, 2009. He was affectionately known as Kimbo to his friends and family.

Kim was born May 13, 1958 in Palo Alto, California to Marcelline and Donald Stewart. He was the oldest of three children. He spent most of his life in Southern California. He attended Rolling Hills High School in Rolling Hills Estates graduating in 1976. During high school he was active in athletics playing on the soccer, football, and track teams. He went to UCLA and earned a Bachelors of Arts degree in Economics. His college interests included his fraternity, Tau Kappa Epsilon, where he made life long friends. Favorite pasttimes were attending UCLA football games, inner tubing on the Kern River, skiing, and road trips with his buddies. He worked his way through college by working in restaurants where he learned Spanish.

After he graduated from UCLA in 1981, he started his 25-year career in aerospace at Hughes Aircraft Company in Fullerton as a Pricing Analyst. While still working at Hughes, he decided to pursue a law degree and attended Western State University in Fullerton, CA at nights. In 1993, he graduated with his Juris Doctor. After he passed the California bar, he went to work for Allied Signal in Torrance, CA as a Manager of Contracts. Kim eventually left Allied Signal and moved back to Orange County going to work for Boeing as a Business Manager.

While working at Hughes, he met Donna and married her in August 1988 settling down in Orange County. They had two sons, Patrick, born in 1992 and Spencer, born in 1995.

He loved his sons and was dedicated to them. When they were little, he was known around the neighborhood for always being outside playing with them, from blowing bubbles to major squirt gun battles to playing street hockey or football. He was really a big kid himself. As the boys got older, he enjoyed coaching their sports teams, including basketball, baseball, and especially soccer. He was an umpire for Little League games. He was also a referee for youth soccer and would ref soccer games together with his son, Spencer.

He loved playing sports himself, especially basketball and soccer. He coordinated and played on a men’s basketball team for close to 20 years. Although short, he was fast and could make those 3-point shots. He enjoyed cooking and would make gourmet dishes. He enjoyed outdoor activities, such as fishing, camping, and snow skiing. He also enjoyed woodworking and reading, especially Science Fiction. He had an avid interest in electronics and music. However, he most enjoyed just being around family and friends.

He had a funny sense of humor and was always ready with a quick pun followed by a grin. He was light hearted and was a very caring, affectionate, and loving person. He was always happy and always wanted to make others happy, also.

In addition to Donna and his sons, Patrick and Spencer, he is survived by his father, Donald Stewart; his sister, Laurie Stewart; and his brother, Chris Stewart.

A celebration of his life will be held on Saturday, September 26, 2009, 9:00 A.M. at Saddleback Church, 1 Saddleback Parkway, Lake Forest, CA 92630 in the Plaza Room. There will be a reception following the ceremony on the Plaza Terrace.

In lieu of flowers, a college trust account has been set up for his sons, Patrick Stewart and Spencer Stewart. Donations can be made in the name of the children to assist with their college expenses.

He will be missed and will always be loved!