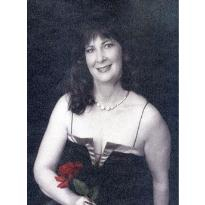 Kellie Sue Smith, 53, Rancho Santa Margarita, was born on October 31, 1956 in Springfield, MO, the fourth of five children to Homer and Betty Smith. She was a brave survivor of breast cancer 10 years, uterine cancer 3 years; however a third cancer, peritoneal, was detected in November 2009 which she could not beat and departed from this life on Thursday, March 25, 2010 As a child she lived in a couple of different cities and states before residing in Southern California. She graduated college with a two-year Associate of Arts degree in Theatre. Kellie very passionately wanted to become an actress, but was never able to break into the business. Kellie never married nor had any children. However, she did have her black cats keeping with the Halloween theme Isis and Osiris. Kellie has resided in Rancho Santa Margarita, CA since 1993 and attended Saddleback Church.

Kellie was preceded in death by her mother and father. Kellie is survived by her three brothers, Gerald Smith and wife, Joanne of Trabuco Canyon, CA, Roger Smith of Springfield, MO, and Bruce Smith and wife, Darlene of Santa Ana, CA; one sister, Tracie Mitchell and husband, Gary of Ozark MO; three nieces, Kimberly, Jaime and Rhianna; one nephew, Joshua; three great-nieces, Madison, Alexandria and Hailey; one great-nephew, Ethan; and a host of friends.

Funeral services will be held at 11 a.m., Tuesday, March 30, 2010 at Saddleback Church with Pastor Rick Muchow officiating. Visitation will be from 7 to 9 p.m., Monday, March 29, 2010 at O?Connor Mortuary. Burial will take place in Springfield, MO. In lieu of flowers, memorial donations may be made to American Cancer Society.