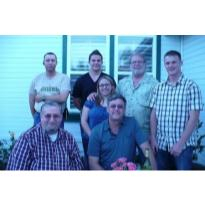 By ERIKA I. RITCHIE
THE ORANGE COUNTY REGISTER

LAKE FOREST Keith Berger, who three years ago achieved his lifelong dream when he opened a pet store dedicated to animal health and hand-tamed exotic birds, died on Friday. He was 58.

Pet Country ‘ located in the old Von’s shopping center off El Toro Road and run by Berger and his 21-year-old daughter, Katie gained a following of devoted customers, both for its philanthropy and service.

The store’s assistant manager on Friday afternoon found Berger slumped in his chair behind the counter, after he’d suffered an apparent heart attack.

Paramedics rushed him to Saddleback Memorial Medical Center where he died after doctors worked for an hour to revive him, said Katie Berger.

Berger sent customers away with more than just a purchase, said Dr. Matthew Wheaton who had just partnered with Berger in a cat adoption program.

‘Keith was a big asset to the community,’ said Wheaton. ‘He did a lot of research on the products he sent out of the store and did a great job educating owners on proper nutrition. He also had his heart in the right place and recently decided to partner with The Pet Rescue Center to house cats for adoption that had been saved from imminent euthanasia at local animal shelters. This was a service that was unpaid and was out of the goodness of his heart.’

Katie plans to continue to run the store in her father’s memory.

‘He was a great father,’ she said Monday through tears while tending to the shop. ‘He was the guy my brother and I could go to and talk about stuff. The pet store was his dream. He always wanted to run his own business. My dad treated me really well and taught me everything about the business.

He earned an MBA at Pepperdine and served in the U.S. Navy for six years from 1971 to 1977.He was born in Inglewood and graduated from San Joaquin Memorial High School in Fresno, where he grew up.

He is survived by his wife, Mary; daughter, Katie; son, Stephen, 19; and brothers Glenn and Paul Berger.

Services will be held 10 a.m. at St. Edwards Catholic Church in Dana Point on Oct. 7. Visitation starts at 9 a.m.

He will be buried in Riverside National Cemetery.