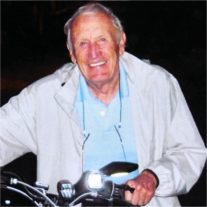 Keith was blessed with a wonderful talent for singing and grew up singing in the Lutheran Church, in high school and college plays, and at weddings, funerals, many celebrations and performances.

Keith was a potato farmer who began selling 50 lb. bags of potatoes door to door in Minneapolis, while attending the University of Minnesota and earned a degree in Agriculture. He continued to market potatoes growing them in ten states and supplying them to General Mills. He flew his Bonanza Airplane to monitor his business and he joked his office was in the cockpit of his plane.

Keith served as a 1st Lt. Intelligence Officer in the United States Army in the 1950’s.

He later married Patricia Pierce and they lived in Cave Creek AZ, and had two children, Jessica Anastasi and Jacob Jorde.

Keith married Sandra Jones Turner in 2002. They resided in Arizona, California, and wintered many years in Manzanillo MX. She survives, along with his 8 children, 1 stepson Jeff Turner, 18 grandchildren, and 2 brothers, Grant Jorde and Jim Jorde.

A Celebration of Life Service is to be held this fall in Cave Creek AZ.

Contributions may be made in Keith’s memory to Cardiovascular Research at Mayo Clinic in AZ (www.mayoclinic.org/giving-to-mayo-clinic); The Foundation of Laguna Woods Village; Meet the Need Foundation (a non-profit mission project in Manzanillo MX) to 2216 River Hills Rd., Austin TX 78733.