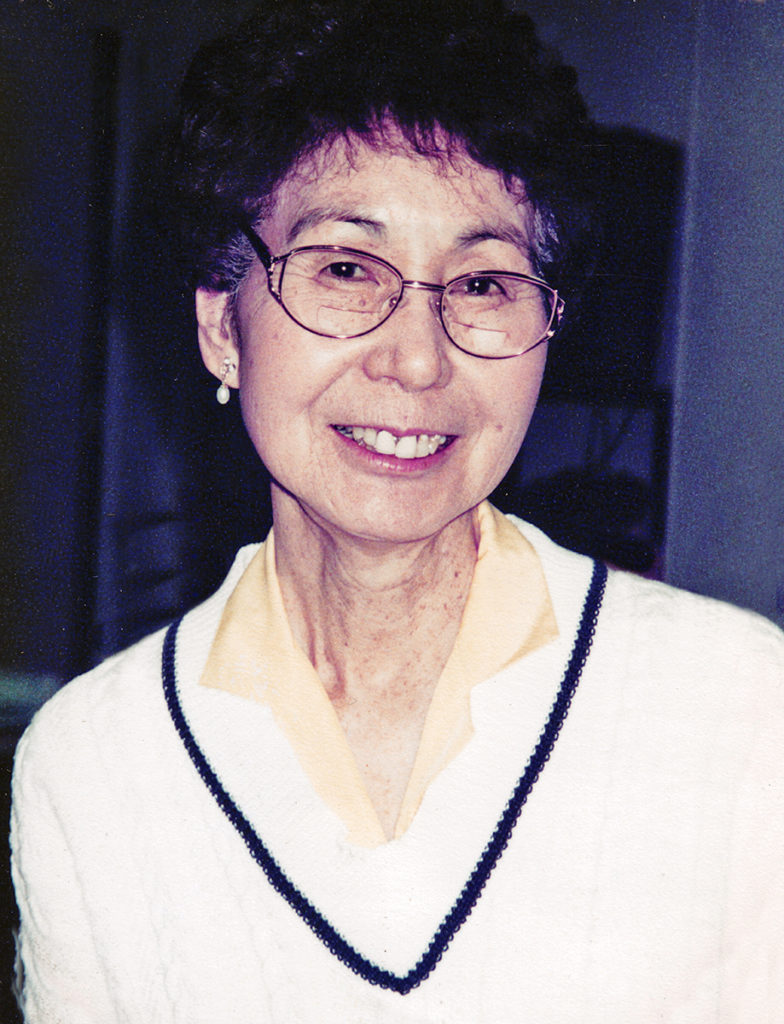 Kazuko Nishiura Hallstrom passed away November 24, 2020 at her home in Mission Viejo, California. Kazuko was born March 17, 1927 in Sasebo Japan, the youngest of six. Her parents were Motoichi Nishiura and Kane Nagafuchi Nishiura. She graduated top 3 of her high school class and worked for the Japanese Navy in WWII. Kazuko and her family survived the bombing of their home and was able to rebuild and move on with their lives after the war due to the family construction and contracting business.

Kazuko met her husband Lewis (Lew) Hallstrom a naval Boatswain’s Mate Chief who was stationed in Japan during the Korean war. They married in 1955 and moved to the states in 1957 when Lew was transferred to San Diego, CA. A year later their only child Marjorie was born. Lew was transferred back to Japan in 1959 and the family settled in Yakosuka for 3 years to complete Lew’s Naval career abroad.

When Lew retired from active duty with the Navy, the family settled in Long Beach, CA where he began his second career as a landscaper with the Long Beach Unified School District. Kazuko developed many life long friendships in Long Beach, most of which were Japanese women who married American servicemen. The families were close knit and gathered often for birthday celebrations at the park, picnics at the beach and the ladies took turns having luncheons at each other’s homes.

Kazuko saw her parents for the last time when she and Marjorie went to Japan for a few weeks the summer of 1965. She received a letter a while afterward saying that her mother and eldest brother had died.  Although it was quite a shock, she was so grateful to have seen them both on that trip.

Lew and Kazuko loved to take road trips and every summer took Marjorie and the family dog at the time to see the sites of the United States. Among those trips were the Grand Canyon, Zion National Park, Washington DC monuments and Niagara Falls. Visiting family was very important too and there were a couple of trips to Washington State to visit Lew’s eldest brother and family and more often to San Diego to visit Lew’s sister and family.

Kazuko worked also to save up for Marjorie’s college education among other things. She and a few of her Japanese friends wrapped fishing poles at home so they could be available for their kids. Later on, Kazuko worked as an inspector for Bell Helmets and finally part time at Mikawaya Sweet Shop.

As Lew retired from LBUSD he and Kazuko were able to travel more often and loved to go on bus trips with a local Lakewood group called Silver Circle. They met another couple they enjoyed traveling with and went to Carlsbad Caverns, Santa Fe, Yosemite, Crater Lake Oregon and Victoria Island, BC among many other places. Kazuko loved the mountains best of all.

When Lew passed away in 1994, Kazuko went through the grieving process with a support group. She was always the social one of the two of them and made friends easily. She joined activities at the Lakewood Senior Center-cooking classes, senior aerobics and walking the neighborhood with 3 other lady friends.

In 1999 Kazuko was introduced to her new family when Marjorie and Frank got together that year. She embraced them all and enjoyed getting together for family celebrations. Frank’s parents Marianne and Pete lived in Massachusetts and would come out to California twice a year. Marianne went through WWII in Germany so she and Kazuko shared a special bond over the similar trials they went through and getting accustomed to a new country and learning English. Frank’s sister Mary Lou was close by in Los Angeles and welcomed her into the family warmly as only she could do. Alexandra, Frank’s daughter had a lot in common with Kazuko already as she loved dogs, elephants and sushi!!

Kazuko embraced beauty and was almost always involved in a hobby like flower arranging, Japanese doll making and later on creating beautiful hand made Christmas ornaments. She was also a great cook making dishes of all nationalities.

Kazuko was intelligent, outgoing and always made people laugh. She was determined and driven especially when it came to her daughter’s success in education and music. She loved classical music especially piano and supported Marjorie in her endeavor to master the violin. She made sure to get her daughter to all the private lessons and rehearsals and along with Lew never missed a concert. Kazuko herself played flute and drums.

She had to leave her home in Lakewood in 2008 to move to assisted living where she lived for 10 years. She had a wonderful caregiver Maricela and met many friends there. She was always at our family gatherings for the holidays and birthdays. Her last two years were spent in a board and care home in Mission Viejo where she lived with 5 other Japanese ladies. Her main caregiver Miki-san was the most comfort to her,getting her to speak Japanese again as her primary language and who was there with her on her last day along with Marjorie. Her best friend Yasuko Arthur passed away a month earlier so mom went too to keep her company and to be reunited with Lew.

Kazuko’s funeral service will be at O’Connor Mortuary in Laguna Hills on December 18th, 2020 at 10:00 AM. Chaplin Al Burnham will perform the ceremony. The ceremony will be virtually webcasted live and available 30 days after the service.