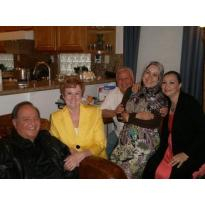 Kay Assad Astarabadi was born in Baghdad, Iraq in the year 1934. He left Iraq when he was 14 to attend private school in Beirut, Lebanon. It was his lifelong dream to move to the United States. Soon after graduating from high school, he embarked on his journey to America. He attended Oklahoma A & M with his cousin Adnan Astarabadi. In 1957, he and his cousin drove to California and found his true home and love.

Kay met Gloria the first day he arrived in Fresno. It was their destiny. They were married in August of 1960, Fresno, California. Kay graduated with an AA degree from Fresno City College. He worked at Fresno Distributing for over 10 years. Kay also worked for Thrifty Supply Company. He joined Nutone and was employed for over 25 years and then retired.

Kay and Gloria resided in Fresno for over 35 years and then moved down to South Orange County. He continued to work for Nutone in Southern California until his retirement. Kay was a family man and the embodiment of a father for many people besides his own children.