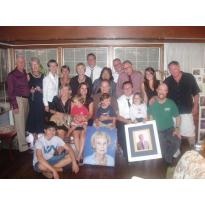 Born August 2, 1920 in Los Angeles and died on July 30, 2010, three days short of her 90th birthday, at her home in Corona del Mar. Kathleen was the youngest of 5 children of Edmond Shanahan, M.D., a native of Ireland, and Agnes Cavanaugh, whose parents also came from Ireland.

After graduation from Hollywood High in 1938, she attended Rosary/Dominican College in River Forest, Illinois, where her aunt was a member of the faculty and the order. From there, she went to her father’s alma mater, Creighton University Medical School, where she was one of two women in her class. In her first year, she met the love of her life and future husband, Leo V. Turgeon, Jr., over their assigned cadaver.

Leo, a resident of Kansas, a 1942 graduate of Notre Dame, and eventually an honorary member of their Monogram Club, became an ENT specialist and practiced in Los Angeles. Kathleen and Leo were married in the Log Chapel at Notre Dame in 1944. After Kathleen’s internship at St. Vincent’s Hospital in Los Angeles, she became a school physician for LAUSD where she worked for 41 years. She continued working as a part time consultant after leaving her full time position in 1989.

She enjoyed traveling the world and finally retired with Leo to Corona del Mar, California, in 1994.

She is preceded in death by her husband of 55 years Leo and her three brothers, Edmond, John, and James Shanahan. She is survived by her children Laurie Olson, Mimi Turgeon, Leo Turgeon, Steve Jean Turgeon, and Paul Debbie Turgeon; grandchildren, Erica and Matt Shelley Olson, Hannah, Riley, Max, and Ella Turgeon; great-grandchildren Adam and Reid Olson; and sister Maureen Hallett.