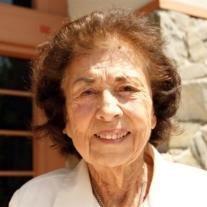 On December 23, 2011, at the age of 87, Katherine “Kay” Harrell was granted her angel wings to God’s celestial shore. Her final days were spent at home surrounded by family and friends whom she loved dearly. Kay was a strong Christian woman who lived a life wrapped in the love of Jesus.

Kay was born in Omaha, Nebraska on April 26, 1924 to Katherine and George Miller. She was the oldest of 4 Children. She grew up in Wichita, moved to New Orleans where she married her husband James “Jimmy” Harrell on April 7, 1945. In Little Rock, Arkansas they were blessed with two amazing daughters, Georgia and Jamie. In 1966, Kay opened an antique store in Phoenix, Arizona and in 1969 moved to California where Kay continued running, The Doll Trunk, until her final days. Kay and Jimmy settled in Lake Forest, California in 1970. In 1982, Kay lost her best friend and husband. She stood strong and continued to love and support her family through her last days.

Kay is survived by her two daughters, Jamie Jones and Georgia Jones; Sister Mary Katzenstein; 5 Grandchildren and 4 Great Grandchildren. She will be missed greatly in all our lives, but we will meet again on God’s celestial shore.