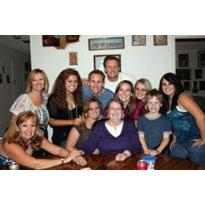 During Karen’s early childhood, the San Souci family moved many times as her father followed work. They lived in Kansas, Oklahoma, Missouri, New Mexico, Minnesota and Illinois. Eventually the family landed in Galena, Illinois which became their true home. Karen attended elementary and middle school in Galena and eventually graduated from Galena High School in 1958. Karen was a member of the Galena high school band and choir. After high school, she attended and received a diploma from Humboldt School in Minnesota in December 1958. The following year, she married James Virgil Gaber, her high school sweetheart, on July 4, 1959. Susan, their first child was born in 1961 in Wisconsin. Prior to the birth of Patricia, their second child in 1963, the family moved to Anaheim, California. They welcomed their third child, Michael in 1966. Her husband Jim was killed in a work accident in November of 1969 which left her as a single mother at 28 with three children ages 3, 5 & 7. Karen spent the next several years focusing on raising her children. All three children attended St. Justin Martyr School, before going on to Connelly and Servite, both college prep Catholic High Schools in Anaheim. Karen was an active member of St. Justin’s Church for over 45 years, first joining the Parish in 1963. Karen was extremely involved in her children’s lives and focused her time ensuring their education and development. Karen also assumed the responsibility of managing the St. Justin Drill Team, of which both Susan and Patricia were members.

Karen worked for the Pennysaver Magazine in 1977, before accepting a position as a Clerk with the County Of Orange in 1978. Karen worked for the County for 27 years before retiring in 2005 as a Risk Manager. All through these years, Karen managed to attend nearly every game or event her children participated in, while continuing to advance her career.

Karen had many interests, she loved to read, play cards with the family, shop with the granddaughters, play Keno in Vegas, bowl, and travel with her good friends. She especially loved her trip to Greece with Jean and Diane and her annual trip to Mexico with Jean, Diane, Charlie, Cathy and Norma. She also loved the go out with the ‘girls’ on Sunday nights for Chinese food with Jean, Diane, Pat & Ruth. However, she probably got the most satisfaction just attending her Grandkids sporting events, school events and plays. It was not uncommon to see her on the sidelines, cheering on the grandkids and occasionally questioning the coach or the umpire’s calls.

Karen is her families beloved Mother, Grandmother, Daughter, Sister and Aunt. She is the strongest, most independent woman we have ever known and will be greatly missed by all of her family members.

Karen spent much of her free time watching her grandchildren playing sports, therefore, the family requests that in lieu of flowers, a donation may be made to the Boys and Girls Club of Anaheim http://www.theboysandgirlsclub.org/ to further support sports programs for children in her community.