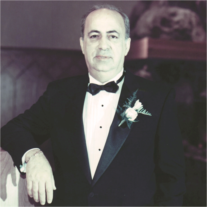 He came to the United States in 1951 and graduated with an engineering degree from Texas Tech University and a masters from Wayne State University. He raised his family in suburban Detroit, Michigan before moving to California to be closer to his adult children.

He is survived by his loving wife Adele, who was his soul mate and always by his side through health and sickness. He is survived by his brother Hanna and sister Widad; his 3 children, Kenneth, Karen and Mark; his stepchildren, Al, Michele, Christine, Jeannine, and Anthony; grandchildren, Tristan Murcia, Sarah Murcia, Nicholas Murcia, and Gabriel Habeeb; Adele’s 16 grandchildren; many nieces, nephews and friends.

Kareem was a man of extraordinary success, both in his personal and professional life. His integrity, humility and love for his family was unmatched.