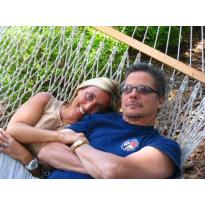 Julia Bunge was born December 29, 1956, in St. Mary’s Infirmary, Galveston, Texas to Ann and Frank Sanderford and her older sister and life-long friend, Catherine. She was named Julia Helen Sanderford. Within months of her birth, she and her family moved to Kansas City, then Blue Springs, Missouri. Over the next three years the young family welcomed the arrival of little brother Alan 1959 and grieved the death of father Frank 1960, after an extended illness.

The passing of Julia’s father marked the beginning of a new journey for her and her family. In late 1960 they moved to Hartsdale, New York, into the loving arms of Ann’s parents, Edward and Helen Leete. These grandparents, especially her grandmother, became a very important part of Julia’s life, providing love and stability through some tumultuous times. For nine years the family lived in Westchester County, New York.

In 1969, due to a job change for Ann’s second husband, the family relocated to the Mount Vernon area of northern Virginia. This was a pivotal time for Julia, who was on the verge of becoming a teenager. Her years in junior high and high school brought many dear friends into her world – some becoming life-long ‘extended family.’ In 1975, she graduated from Fort Hunt High School in Fairfax County, Virginia.

Julia’s keen eye for fashion prompted her next to acquire a one year degree in fashion merchandising from Bauder Fashion College in Miami, Florida, and then round that out with another year and an Associates Degree in Business from the College of Boca Raton. After a year’s adventure as an Au Pair in Geneva, Switzerland, she returned to Northern Virginia.

At this point, Julia found her niche in the restaurant business. She had gained a great deal of experience, starting with summer jobs, and her impeccable sense of service and hospitality moved her quickly into management of fine restaurants in Virginia and, later, Capitol Hill in Washington, D. C. Little did she realize that destiny and her angels were lining up circumstances so that a man named Les Bunge would walk into her restaurant on February 17, 1986, and recognize his soul-mate.

After a whirlwind courtship they were married on June 8th, 1987 on the island of Kauii. Soon after that they were blessed with a daughter, Jessica. Before Jessica turned one a job offer took them three thousand miles west to California. In 1990 their son Morgan was born and they settled in San Juan Capistrano. In 1991 they opened Laser Exhibitor Service Inc. a trade show service company. It served them and the community they lived in well. After being a full time mom Julia went to work for Blenheim Equisports in 2000 as the manager of their private ‘Medal Club.’ She transformed the club into a model of what most members came to expect and need. The class she brought to the club was only surpassed by her kind and welcoming demeanor. Her bright green eyes and huge smile were all that was needed to feel loved. She was an amazing energy.

When she wasn’t working, Les and Julia traveled the planet as best friends and young lovers. It did not matter what country or part of the world they were in they were like kids in a candy store. She found only the good in people. That attitude was contagious. She truly was an angel on earth.

She is survived by her husband Les; her children Jessica and Morgan; her mother Ann; her sister Faith Catherine and her brother Alan. She was a loving Aunt Tanta to J.C., Jillian, Rebecca, Jackie, Jodi, and Joseph. If you ever met Julia you were hugged by Julia. She knew no other way. Those hugs will be missed.