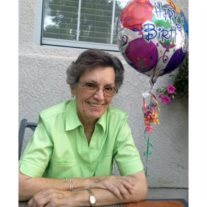 On September 4, 2014, Judith L. Barry, quietly and peacefully left us after fighting a courageous battle with cancer. She was surrounded by her loving husband, Clete, and devoted children, son David and his wife Yao, and daughter Jill. She died as she lived with dignity and grace; always caring for the feelings of those around her.

Born in Seattle, WA on June 13, 1937, Judy was the oldest of three children to parents Hugh and Marjorie LaVille. Her younger sister, Susan, with whom she shared a bedroom until Judy’s departure to college, adored and admired her beloved, older sister and will miss her terribly.

Judy graduated from Bellevue High School in 1955 and attended Central Washington University in the Fall where she met the love of her life, Cletus Barry. Clete had joined the army and was being transferred to Alaska, so the happy couple quickly became engaged and was married on February 23, 1957. In August, they moved to Fairbanks, AK. They lived there for two years and during this time son, David Paul, was born on March 24, 1958.

In 1959, Clete was honorably discharged from military life and the small family decided to move back to Bellevue, WA and purchased their first home in Highland Hills and it was there that daughter, Jill Cathleen, joined the family; born on April 8, 1960. Highland Hills was also where many life-long friendships were made: Ogilvie, Sater, Janssen, Sparks and Hanna families.

Judy was a stay at home mom, while Clete joined the family grocery/meat cutting business to earn a living. In 1969, Judy returned to the work force as an Administrative Assistant for the Bellevue Public School District, spending time at both Tyee Jr High School and then moving to Highland Middle School. The family enjoyed camping and waterskiing together and Judy even found time to play on a softball team and bowling league for many years. She worked 25 years for the school district and in 1997, she and Clete retired and moved to Mission Viejo, CA to be close to their adult children and grandchildren; Joshua, Sean, Tyler and Tara.

During retirement, both Judy and Clete spent hundreds of hours attending little league baseball games, soccer games, basketball games and swim meets. She was her grandchildren’s biggest cheerleader. In between these activities Judy found time to volunteer at the Thrift Shop that is associated with Mission Hospital, clocked in volunteer hours in the office of St. George Episcopal Church for 10 years and she was an active member of the Palmia Landscape Committee and Garden Club. During this time, Judy and Clete made many new friends living in the Palmia community and enjoyed attending numerous Palmia sponsored functions and events.

She fell in love with the California sunshine and spent a lot of time exploring the California beaches; San Clemente became one of her favorites. Judy and Clete were also fortunate to travel the world and enjoyed taking several trips during retirement; Caribbean Cruise, Panama Canal Cruise, Seine River Cruise, Smokey Mountain Bus Tour, Ireland/Scotland Tour and Costa Rica Tour.

She was a woman of tremendous joy and easy laughter; always ready for a challenge be it family, work, or play.

Judy is survived by her best friend and husband, Clete (57 yrs); her loving son, David (Yao); her kind-hearted daughter, Jill (David); her pride and joy grandchildren, Joshua (Allie), Sean (Ashlee), Tyler (Sarah) and Tara (Scott); and finally she was over the moon ecstatic meeting and holding her two great-granddaughters; Presley Cathleen and Piper Rae.