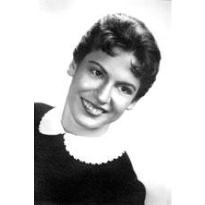 Born to Dominick and Viki Ardantz in Santa Maria, CA in 1939, where she was also raised. She lived on the Ferini Ranch in Betteravia with her family until she was 7 years old, when they moved into town. She died on Thursday, April 27, 2006 at her home in Mission Viejo, California.

While raising her family in Santa Maria, Juanita worked for her father Dominick J. Ardantz, and his partner Milo Ferini, Sr. at the California Ranch. After relocating to Laguna Hills, CA in 1978, she began a career in administration at Mission Viejo High School. She retired from MVHS in December 2000.

Juanita was passionate about people and relationships. After retiring, she volunteered for Hospice as a counselor for 3 years, the Orange County Animal Shelter, the Second Hand Food Bank of Orange County and kept active walking the lake in Mission Viejo, along with Jazzercise and Yoga weekly until being diagnosed with Biliary Cancer in late June 2005. She kept up with her workouts until the chemotherapy regimen became too aggressive for her system in March 2006. The charities she regularly contributed to and remained passionate about the Alzheimer’s Association, The Ocean Conservancy, Defenders of Wildlife, United Farm Workers, and PBH Produce For Better Health. Her children were with her as she convalesced at home the last three and a half weeks of her life. In that time, she shared her thoughts, and feelings about life, death and laughter. She remained positive until the very end, reflecting back on her happiest moments in life; frequently, they were on the ranch with her children.
In commemoration with her desires, there will be a Celebration of Juanita’s Life held on Saturday, June 10, 2006 ~ 1- 4 P.M. at The Hitching Post, 3325 Point Sal Road, Casmalia, California. 805 937-6151
***All who knew and loved Juanita are welcomed to attend.

In lieu of flowers, the family suggests remembrances may be made in Juanita’s memory to the following charities: