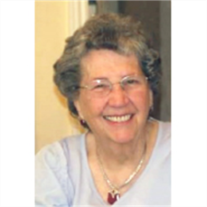 Joyce Teemer Schrello, an amazing mother, grandmother, sister and friend, was called to heaven on May 6th 2016.

Born prematurely on July 17, 1934 in Pittsburgh, Pennsylvania, Joyce beat all of the odds and not only survived, but thrived. Joyce and her younger sister Janet were raised in the suburbs of Pittsburgh by their mother, Catherine (Barrett) Teemer and their father, Albert James Teemer.

Joyce attended the Roman Catholic Saint Francis Academy for girls from where she graduated High School in the spring of 1952. In the fall of 1952 she began college at the Carnegie Institute of Technology women’s college, Margaret Morrison Carnegie College. Joyce graduated with a Bachelor of Arts degree in secretarial studies and teaching credential in the spring of 1956.

While attending Carnegie, Joyce participated in the Newman Club, a Catholic student’s organization, where she met Dominick (Don) Schrello. Joyce and Don were married in November of 1955.

In the summer of 1956 Joyce and Don moved to Columbus Ohio for Don’s career. Once in Columbus Joyce obtained a job teaching English at a local catholic school. In 1958 they welcomed a daughter, Margaret (Peggy Lebrecht).

In the summer of 1961 the Schrello family moved to the Palos Verdes Peninsula near Los Angeles California. Joyce quickly became an active member of the newly formed St. John Fisher catholic Parish community, participating in the guilds and other social organizations.

Though Joyce lived in Southern California and loved it, her heart was never far away from Pittsburgh, PA. Throughout the 1960’s and into the 1970’s most years summer vacations were spent returning to her home town of Pittsburgh to visit her Mother, her sister and the extended family.

Joyce and Don divorced in June of 1981. Joyce then took a job at the Palos Verdes Art Center where she performed many roles throughout her years there including the Financial Manager for the Art Center. During the latter half of the 1980’s Joyce made the decision to return to school to pursue her Master’s Degree at California State University Dominguez Hills. Challenging her mind was something that Joyce always thrived upon and in 1992 Joyce was conferred with a Masters degree in Marriage & Family Therapy from that University.

Joyce became actively involved in the Beginning Experience (BE) community – a support group for widowed or divorced Catholics in the late 1980’s, helping to start a local chapter of the organization in the Los Angeles area. She remained an active member of this group until her death. She was very proud of her participation in BE and spoke often and with great love of the friends that she had made within the BE community.

In the early 1990’s Joyce was offered, and accepted, a position working for the Los Angeles County Children’s Art Museum, in downtown Los Angeles. She worked as the Museum’s Financial Manager until she retired in 2004 (?).

In June of 1998 Joyce moved from the Palos Verdes Peninsula to Laguna Woods, California in Orange County. She took up residence in the large Leisure World Community. Also in 1998, Joyce was gifted with her first grandchild, Josephine Fithyan. In 2000 a second grandchild, Hayden Fithyan was born. And in 2004 her third grandchild, Owen Fithyan, joined the family.

Joyce was “in her element” in the Leisure World community. Always a social person, Joyce participated in many classes and clubs, filling her time with a multitude of activities. Always an avid and masterful Bridge player thoughout her life, Joyce enjoyed playing Bridge with many new found friends 1 to 2 nights per week. She developed her artistic skills in various art classes, slip casting and painting, just to name a few.

Another lifelong passion for Joyce was knitting. She remained actively involved in a knitting club with many of her Laguna Woods friends until her death. Joyce also possessed a love of reading and participation in her book club brought great joy to her. The books that she read with the book club were always the subject of much conversation between her and her daughter Patrice, who is also an avid book reader.

In 2012, with decreasing mobility due to neuropathy and following two knee replacement surgeries, Joyce made the decision to move to the Freedom Village Retirement Community on El Toro Road, where she lived until her sudden death. Again she thrived on the new friendships that she quickly established at Freedom Village. In Joyce’s mind one could never have too many friends. She spoke often and fondly of her many friends. Every one of her friends was very special to her. She made it her mission to know everyone’s “story” and to truly listen and remember the things that were important to each person. She reached out to those having hardships and prayed regularly for everyone needing strength in their life.

This community was truly a very happy place for Joyce. It was a blessing to her to have the peace of mind in knowing that she was to be well looked after in this community. She enjoyed serving on committees and sharing holidays and events with the residents of Freedom Village.

Joyce will be greatly missed. She is survived in life by her sister Janet Bonk, her daughters: Peggy (Mark Lebrecht), Patrice (Edward Fithyan), and Terry, her son: Paul, and her grandchildren: Josie, Hayden and Owen Fithyan.

Donations in Joyce’s memory may be made to either of the following charitable organizations: The Foundation for Peripheral Neuropathy or Bethesda Lutheran Communities.