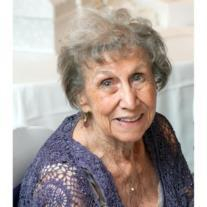 We are saddened to let you know we have lost the finest Mother, Grandmother, Great Grandmother, Sister, Sister-in-Law, Aunt and friend we could ever ask for. Josephine Anne Gehley, Jody to her friends, (which meant everyone) passed away on February 26, 2015.

Jody was born in Orleans Nebraska on April 11, 1924. Wanting to experience life outside of the family farm, Jody’s Mother, Etta Boehler, made arrangements for Jody to live with her Uncle Ed and Aunt Carrie in Southern California. In Los Angeles, she reconnected with one of the boys she knew in Orleans, Nebraska, Francis Gehley. Frank was soon leaving for Hawaii as he had enlisted, at 17, in the US Navy. When Frank returned to the mainland after the war, Frank and Jody were married.

Jody and Frank lived in a small 1-bedroom home in the Fairfax District of Los Angeles. This arrangement (in the back of Grandma Gehley’s home) worked well to a point but as the family grew to 5, it was obviously time to move. They bought their first home in Westchester in 1958. Over the next two decades, Jody, never a complainer, worked non stop while she raised her family of four children, several dogs, rabbits, a raccoon, ducks, hamsters (anything the kids brought home). She and Frank took great pride in sending all their children to Catholic elementary and high schools and the colleges of their choice. They supported all the kids’ sports and never missed a game (sometimes even when their own kids weren’t playing). Jody was an enthusiastic fan of all the activities: St Bernard’s HS cheerleading, baseball, football, LMU baseball and Chapman volleyball and PTA’s. The Gehley house was always a haven for the teams, with many coming over at all hours for Jody’s peanut butter sandwiches and chocolate chip cookies.

In 1977 Frank and Jody moved to Mission Viejo CA following (or leading) a group of many adult friends and families to Orange County. Frank and Jody have been members of St Kilian’s parish since 1977. In Orange County Jody was a professional executive secretary for the Mission Viejo Company, and was very proud of returning to school at age 60 to get her AA degree at Saddleback College.

Jody was the definition of vitality and energy. She loved entertaining and having parties. She thoroughly enjoyed her life, loved her friends and cherished her family. Ninety years was just not enough time.

Vigil service will be at 7pm on Wednesday, March 4 at O’Connor Mortuary in Laguna Hills. A Funeral Mass will be held at St. Kilian Catholic Church in Mission Viejo at 10:30am on Thursday, March 5.