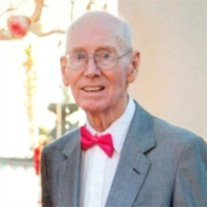 Joseph Wesley Shaffer, born March 7, 1931 in Muncie, Indiana passed away peacefully September 17, 2013 at his home in Laguna Woods, California. Best known as Grandpa Joe to his family and friends, he could always be found center court playing tennis or on the sidelines with his wife Gladys cheering on the grandkids in their various endeavors.

Joe followed his big sister Mary to Olivet Nazarene University in Kankakee, Illinois, where he met the love of his life Gladys Freeman in his sophomore year. They married August 8, 1953, and moved to Gladys’s hometown of Oskaloosa, Iowa where their only son Steven Wesley was born on April 5, 1955. Four months later, the family was off to explore Alaska while Joe served in the army.

After completing his service, Joe returned home to Oskaloosa. His interest in architecture led him to begin a career in construction, where his natural talent in the field quickly became apparent. In 1960 he started his own business, Marvin Construction Company, and promptly made a name for himself as a preeminent builder of churches and schools in and around Iowa.

Ever the family man, Joe also built beautiful homes for his family and for that of his brother-in-law Ray-creating an idyllic neighborhood that became the location of family get-togethers and allowed his son and cousins to enjoy a childhood together full of basketball, football, and great times. He concluded his career with his proudest achievement: designing and building The First Church of the Nazarene in Oskaloosa, Iowa-a grand church that became an architectural landmark in the city.

After attending his brother-in-law Dick’s wedding in Southern California, Joe and Gladys fell in love with the area. Over time, they retired to Orange County where Steve lived with his wife, Linda, and their two children, Christina and Scott.

An Architectural Digest junkie, Joe took an interest in woodworking during his retirement years and developed into quite a talented craftsman; his home is furnished primarily with his own handiwork and original designs.

With a clever wit and easy manner, Joe never spoke a word that wasn’t equal part kind and encouraging. Joe Wesley Shaffer brought much joy and laughter into the lives of many. We will miss you dearly, Grandpa Joe.

He is survived by his wife Gladys, son Steve, daughter-in-law Linda, and grandchildren Christina and Scott. He was preceded in death by his sister Mary and his beloved daughter Sandy Jo.