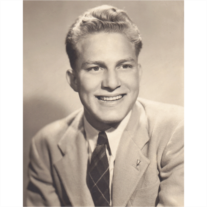 Joseph Thomas Marchesano passed on November 21, 2016 after a long and fulfilled life. He was born on February 9, 1925 and spent his life in service to those around him. He cared deeply for his mother and his seven brothers and sisters. At a young age Joe became the one everyone knew they could depend on.

Upon graduating from Loyola High School he joined the Army Air Corps. Joe helped support his mother and siblings while serving his country. He earned the rank of Second Lieutenant; taking college courses, qualifying on single engine fighters, and eventually piloting a B24 Liberator. Joe referred to his years in the Army Air Corps as the best time of his life.

After World War II, and the completion of his military service, Joe married Mary Catherine McDougall. Together they raised four children; Mary Jo, Ann Marie, Kathleen and Joseph (Joey). Joe was a devoted husband and father.

Continuing in his service to others, Joe joined the Los Angeles Police Department. Joe earned the respect of his fellow officers and the community; serving with integrity, honesty, and dedication. He retired in 1975 at the rank of Captain and Commander of Rampart Division.

After the devastating loss of his beloved Mary Catherine, Joe remained active with the LAPD Retirement Association and stayed in contact with his friends from Loyola High school for many years. He enjoyed cooking and baking from scratch, like his Mary Catherine and her mother Cathy taught him.

Joe remarried and spent 15 happy years with Mary Jane Brockman, until her passing in 2000. Joe welcomed her family into his and they enjoyed their time together playing golf, traveling, and hosting family gatherings.

Joe’s devotion to his family was a constant throughout his life. He had a special bond with his son Joey, who passed away in 2007. Joey had a great admiration for his father and they enjoyed spending time together outdoors. As he did with the passing of his wives, Joe showed great strength and character after the passing of his son, remaining a kind and caring man.

Joe also enjoyed spending time with his grandchildren (Gus, Matt, Kris, Joe, John, Katie, and Stephanie) and great grandchild (Kaitlynn). He cared greatly for them and was always actively involved in their lives. Joe was a wonderful story teller, often providing advice and life lessons within the stories he would share.

Joe was the foundation of the family and truly admired for his strength, resilience, and ability to help those in need. He was the one we all turned to in times of crisis and times of joy. Joe was always thankful for the amazing life he was blessed to lead. Despite all of his accomplishments he maintained a genuinely humble demeanor, never wanting praise or attention and never taking for granted all the blessing bestowed upon him.

Remaining independent and strong willed, Joe spent his final days at Vintage Assisted Living. He attended mass, made new friends, and remained close with family, especially his son-in-law Gus, who was like a son to him.

While his loss leaves a hole in the lives of all of those who knew him and his shoes are ones that will never be filled; his loved ones take solace in the fact that he is at peace. His memory and character will be carried on in our hearts for generations to come. He truly made those around him feel loved and protected. For that, he will always be cherished.