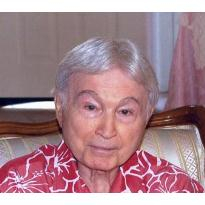 Raculia, Joseph, 87, retired pastor, passed away on December 26, 2009. Joseph was born and raised in Kansas City, the oldest of seven children. He graduated from high school at 16 and shortly thereafter went to work in the engineering department at TWA. He then joined the Army Air Corp, serving proudly in WWII, It was during this time he received a call to Christian ministry. Joseph began attending Southwestern Bible Institute, graduating with a BA in Ministry. While there, he planted his first church in Dallas, TX. He led a building project as the church erected its first sanctuary, shortly thereafter he was ordained by the Assembly of God denomination. He lived a fruitful life, serving 50 years in ministry with his beloved wife Angelin, who preceded him in death in 2007. They touched countless lives during their pastorates in Dallas, Los Angeles and Buena Park. He was also known as a dynamic preacher and gifted teacher of the Word of God. Joseph’s great faith and passion for God inspired others to pursue their own calls to ministry. His church in Dallas resulted in the birth of four churches which are thriving today. After retiring from his last pastorate, he served in ministries with the denomination, including Convoy of Hope, the Church Care Network, and did interim pastoral work. Joseph loved spending time with his family, traveling and gardening. He is survived by three daughters, JoAnn Kreun Glen, Pat Hill Jim and Mary Lou Singleton Steve. His legacy continues with three grandchildren and two great grandchildren. He will be greatly missed by all who are blessed to have known and loved him.