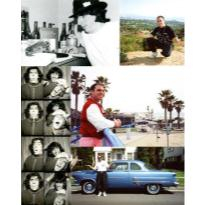 Joe was a 1973 graduate of St. Joseph High School. He earned a Bachelor of Arts degree at Grand Valley State College. He studied French language and culture at Institut d’Etudes FranÃ§aises de Touraine and earned a degree in Economics from Universite Francois Rablais de Tours, in France. As a part of his studies at Thunderbird School of Global Management, he attended Oxford Centre for Management, Oxford England, and Management Centre Europe, in Belgium.

A natural athlete, he enjoyed running, skiing, swimming, surfing, and scuba diving. He was also accomplished in fencing, archery, Tae Kwon Do, and held a Black Belt in Karate. Throughout his youth, he spent summers as a lifeguard at Jean Klock, Tiscornia, and Lions Park Beach. For the past 30 years he worked in the film industry, first as a stunt man, then as an actor and producer.

Joe loved animals, especially his dogs. Those who wish to honor his memory may give a gift to the Humane Society, Animal Aid, or an organization of the donor’s choice. Services have been held. Arrangements by O’Connor Mortuary, Laguna Hills, CA.