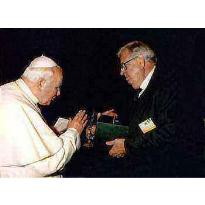 Pierce, Joseph K. M., 77 of San Juan Capistrano, California, passed away peacefully on Saturday, August 26, 2006 due to a long illness of acute leukemia. He was a business owner of a jewelry store in San Juan Capistrano for 23 years.

Joe was most proud and honored to be a member of the Knights of Malta 10 years. He was blessed with the opportunity of having two private papal meetings with Pope John Paul II, one of them to return a stolen relic of the true cross that only a Knight of Malta is called upon.

He is loved and respected by his five children, Cheryl Mittelstaedt Mike pf Anaheim, CA, Mark Pierce Pam of Sandy, UT; Ron Pierce Jackie of Garden Grove, CA; Joe Pierce Debbie of Anaheim, CA and Teresa Pierce Remmel of Garden Grove, CA. He was also a Grandfather to eighteen grandchildren and one great-grandson. Also he is survived by a brother, Sam Pierce of Los Alamitos, CA, and a sister, Anne Martinek of San Juan Capistrano, CA. Sam, Anne and nephew Ed Muscat shared many good times together.

He had a gift for telling jokes and making people laugh, but his true passion was singing. He loved to entertain and hang out at one of his favorite places. Thai This Restaurant in Dana Point, CA.

His motto was ‘There’s no business like Joe business’

The family would like to give a special thanks to Dr. Lawrence J. Luppi for being a dear friend, Daniel and Letti Naujock for all your love and support, and to Companion Hospice for the wonderful care that was given.