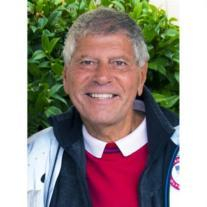 Joseph Lupo, of San Juan Capistrano, passed away at his home on December 31, 2012 after a short battle with pancreatic cancer.

Joseph was born in Newark, NJ to Lena and Louis Lupo. He was involved in Catholic Worker, Birth Right, Knights of Columbus and Cursillo of Orange County.

He is survived by his wife, Maria; daughters, Lisa and Tara; son, Bo; grandchildren, Nicolas and Sophia; and brother, Larry.

He lived his relationship with Jesus so authentically that he leaves a wide wake of loving relationships in caring for the least of our brethren – a true friend.

Most Important things I’ve learned from my father:

1. Most important relationship you will ever have is with God.

2. Most important thing you can ever do is be joyful.

3. Most important thing you can ever give anyone is encouragement.

I believe in you.