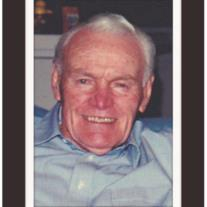 Joseph Francis Heeney died at his home Saturday, Feb. 21 in Aliso Viejo, California with family at his side. He was 97 years old.

Born Jan. 13, 1918 to Frank and Catherine Heeney in Johnstown, PA., Joe earned the nick name of Butch at an early age. He was the first of five Heeney children also including Mary “Mame,” Anna “Marge,” John and Frances.

In 1937 Joe graduated from Central Catholic High School in Johnstown. He continued his education at St. Vincent College where he was an avid and well-rounded sports enthusiast having played collegiate football, basketball and baseball.

In 1942 he began what was to become a 30-year career in the US Navy. He served on eight Navy vessels including aircraft carriers USS Valley Forge and USS New Jersey. Some of his favorite memories came from his time assigned to the USS Topeka. Over the course of his career he was decorated with 17 medals, ribbons and commendations along with numerous bronze stars. He was recognized for service during World War II, the Liberation of the Philippines, the Korean Conflict and the Viet Nam campaign.

Although Joe was dedicated to the service, the true love of his life was his family. He married Marcella Elaine Houske, a South Dakota native, on Oct. 5, 1952. Just over three years later, they welcomed their first child, Kevin Joseph. In 1962 their daughter Cheryl Elaine arrived. The family lived primarily in Torrance, California although they accompanied Joe on two tours of duty; one to Bainbridge, Maryland where Cheryl was born, and the other to Kodiak, Alaska.

Joe hung up his Navy uniform in 1972 after rising through the enlisted ranks to a Chief Warrant Officer 4. After retirement, he spent some time in real estate sales. In 2007 he and Marcella moved to Orange County.

He was a healthy and happy man, greeting all with a warm smile and a firm handshake. He was a charming man who commanded honor and respect from all who surrounded him.

He was preceded in death by his parents and siblings.

He will be buried on Friday, March 13 at Riverside National Cemetery with full military honors. Please note that the military limits flowers at the cemetery. The immediate family has taken care of the only flowers that will be permitted at the service.