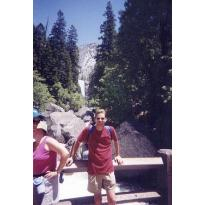 After leaving Hawaii, he spent a brief time traveling with his family from coast to coast. Dad was in the Marine Corps At the age of 4, Joe’s family settled in Santa Ana, California. From elementary age through high school; from t-ball to Little League and Pop Warner Football; Joe always loved sports. Before graduating from Santa Ana Valley High School, Joe lettered in Baseball, Basketball and Football. He was a life long fan of the Los Angeles Angels and the San Francisco 49ers.

After high school Joe attended Orange Coast College and continued his education at Cal State Fullerton. Most of Joe’s career was spent in various management positions in the Restaurant and Bowling Center Industries.

Many of Joe’s childhood vacations were spent camping and he always enjoyed the outdoors, especially camping in Yosemite National Park with friends.

Those who knew him saw an easy-going, fun-loving person with a quick wit and sense of humor. Joe touched people on many levels and will be deeply missed by his family and friends.

Services were held the evening of Monday November 17th, 2008 in Laguna Hills, CA.