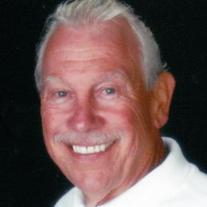 Joseph was born March 14th, 1938 to Emma Jane and Alexander Bucho in Detroit, Michigan. His Dad was the minister of a small Christian church. Alex, his dad, was a very handsome Hungarian man and Emma Jane, his mother, a most beautiful Irish lady. Hence, you now know where Joseph got his good looks! When he was almost five years old, his little sister Faith came along and that was their family.

At the age of seventeen, Joseph wanted to see the world, so he pleaded with his Dad to sign for him to join the United States Navy. He spent four years in active duty and four years in the reserves. Joseph took hold of the Navy life with no problem. He was afforded the opportunity to serve on board the USS Shangri – La aircraft carrier. He traveled to Hawaii, the Philippine Islands and Hong Kong, China. After his travels at sea, he was stationed in Long Beach and fell in love with the State of California and decided to make that his home state.

Upon Joseph’s discharge from the Navy, he worked for an aircraft company, drove a 7-UP truck and then distributed gasoline for Shell Oil. He also desired to become an actor, so he took some acting classes and did belong to the Screen Actors Guild. Being ambitious as he was, he eventually ventured into self-employed businesses for some years. Eventually, he entered into a job with the Federal Government and after multiple promotions, became a Construction Inspector. Joe was true to his commitment as an inspector and the job better be done right or it would be shut down. He was known for his superior job performance, outgoing personality and dedication to his job. ‘Joe was a Good Joe!’ He was also meticulous about his appearance and always one of the best dressed….always!

Joseph had three children from his marriage to Bert. His first child was Patricia, and then Deborah was born into the family. They also had a son Robert, who very much resembles Joseph. Joseph was blessed when Deborah and Eric gave him two grandchildren Alex and Whitney. Recently, he was so excited when his son and daughter-in-law Courtney announced that his third grandchild Charlotte Rose is expected here in November. His family was a real treasure to him.

During the past 30 years he has spent his life traveling and seeing more of the world again with Carole. Joseph also has shared his life with his step son’s Ed, plus his wife Julie and Eric, whose wife’s name is Stacey. Joseph loved all of his family very much and he was at his happiest when all the family got together. Many fun times were spent with Carole’s sister Judy and her husband Bob on a trip or cruise here and there.

Joseph also had two nieces, Kathy and Susie and two nephews named Jeff, whom he loved to also share his time with.

Joseph’s sister Faith still resides in Michigan and is married to Bud. Joseph liked his brother-in-law very much. They would have great laughs over some of Bud’s ‘one liners’ and they loved talking about and watching their favorite sports teams.

Joseph struggled with Multiple Myeloma and in the end Leukemia. Through all of his difficulties and multiple crisis with the disease, he maintained a positive and calm spirit about himself. He never complained, why me Lord, but kept a positive outlook and always greeted you with his wonderful smile. If you knew Joe, you know about the awesome smile he would always greet you with!

Joseph loved studying his Bible and talking about the book of Revelation. Joseph recently shared that, in his minds eye, he had a vision of Jesus, in His white robe, being with him, holding his hand and walking with him over the rocks. It is so encouraging to know that Joseph is now with Him forever in Heaven!

Praise you Lord forever for your love and tender mercies!

When I am gone, release me, let go.
I have so many things to see and do.
You mustn’t tie yourself to me with tears, be
happy that we had so many years. I gave
you my love, you can only guess how
much you gave to me in happiness.
I thank you for the love you each
have shown, but now it’s time
I traveled on alone. So grieve a while
for me if you must, then let your grief be
comforted by trust. It’s only for a while
that we must part, so keep the memories
within your heart. I won’t be far away,
or life goes on. So if you need me, call,
and I will come. Though you can’t see
or touch me, I’ll be near. And if you
listen with your heart, you’ll hear all of
my love around you soft and clear.
And then, when you must
come this way, I’ll greet you with a smile,
Author Unknown