Joseph ‘Joe’ Baffa passed away peacefully at home on August 5, 2014 of natural causes. He was born in Santa Sofia d’ Espiro, Italy, on September 3, 1925. He and his parents, Louis and Anna Maria Baffa, along with his younger brother, Frank, emigrated to the United States when Joe was two years old and Frank was two months old. They settled on the East Coast where Joe’s sister, Rose, and his youngest brother, George, were born. The family moved to Los Angeles, California in 1940.

Joe attended George Washington High School in Southwest Los Angeles where he was active in the student band playing his life long favorite instrument, the trumpet. At the age of seventeen, he enlisted in the United States Coast Guard where he engaged in many large naval battles in the Pacific during World War ll. He served bravely and received the Purple Heart, among other decorations, and was honorably discharged in 1946 with the rank of Signalman First Class.

After the war, Joe attended Pepperdine University at its original location in Southwest L.A. where he pursued his love of music, majoring in music and education, and also pitching on the varsity baseball team. He later became an avid golfer and enjoyed playing throughout his life. In 1957, he married the love of his life, Lorraine Johnson. He continued his education earning a Masters degree in Education at U.S.C. and teaching music for many years in the Inglewood School System until he went into administration and became an elementary school principal.

In 1973, Joe and Lorraine moved to Orange County where he was principal of Valencia Elementary School in the Saddleback Valley School District until his retirement in 1986. During his 35-year career in public education, Joe had a positive impact on thousands of children. Throughout his life, he also remained the ‘Music Man’ playing his horn for family and friends, being the leader of a big band or combo well into his sixties and giving music lessons to many grateful students, young and old, into his eighties.

Joe is survived by his wife, Lorraine, his sweetheart for 56 years, who supported his activities and devotedly cared for him during the last few years of his life when his health was failing. He is also survived by his brother, George, and many loving nieces, nephews, and in-laws.

A memorial service will be held for Joe on Sunday, August 17th at 1 pm at the O’Connor Mortuary Chapel in Laguna Hills.

In lieu of flowers, please consider making a donation to the charity of your choice. 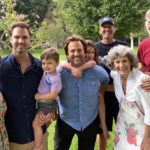