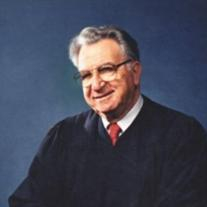 The Honorable Joseph A. Farina, born August 13, 1921 in Plymouth, MA passed away Sept. 22, 2011 at age 90. He lived for the past 14 years in Irvine. He graduated from Plymouth High School, where he was a member of the high school’s first football team. He then attended and graduated from Springfield College (Springfield, MA), continuing to play football. He served his country as a naval officer in WWII and participated in the Allied Invasion on D-Day. After receiving a Master’s in Education from Boston University, Judge Farina taught and coached high school sports in Gaines, MI. He then relocated to California and continued to serve in the Navy during the Korean War. After the Korean War, he taught at Paramount Junior High in Paramount, CA. While teaching, he pursued his dream of becoming an attorney. Judge Farina received his Juris Doctorate and practiced law in Bellflower until receiving his appointment to the bench. Judge Farina served as a Municipal Court Judge for the Los Cerritos Court for 16 years before retiring in 1996.

He is survived by his beloved wife, Martha; their three children, Michael Farina, Teresa Logé and Samuel Farina; five grandchildren; and his sister, Pat Farina, of Plymouth.

Judge Farina touched all with his kindness and concern, and will be missed by many.