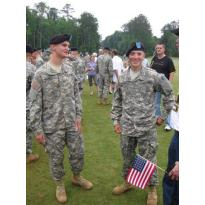 Jonathan Patrick McGinley, 20, passed away on February 2, 2010. He was an active soldier in the United States Army stationed in Korea. Jonathan is survived by his mother Debbie; step-father Kirk Williams; sister Amanda and brother-in-law Steven Krisch. He was a son, brother, grandson, nephew, soldier and friend to many.

‘It is not how they died that made them heroes, but it is how they lived.’