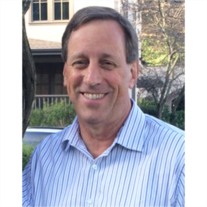 John David Popper, 63, passed away suddenly from Intrahepatic Cholangiocarcinoma on January 31, 2017 at Hoag Hospital in Newport Beach, CA. He was born in Oakland, CA on June 30, 1953; the middle child to John and Beverly Popper.

John grew up in Endicott, NY between the ages of 4 and 12 until the family returned to San Jose, CA. He attended Oak Grove High School in San Jose graduating in 1971. During high school, John played football, basketball, track and cross country. He proudly won the Senior Scholar Athlete Award. John earned a BS in Biology and Marketing as well as an MBA from San Jose State University. He worked 28 years for Unified Grocers most recently as Director, Sales Performance & Analysis splitting his time between the Livermore office and the City of Commerce office. He loved his job but especially the people for whom he worked and worked with. You made a major difference in his life!

John married Lisa January 5, 2013 in Laguna Beach, CA after a three-year courtship. They enjoyed socializing with friends and family, playing scrabble, cribbage, Boggle, Rummikub, pinochle, wine tasting and collecting, traveling to Vancouver, BC, Lake Tahoe, Las Vegas, Europe, Alaska, and his highlight, Custer’s Last Stand. John was an avid road bike rider and participated in many races for worthy causes. If he didn’t get in two rides on the weekend, he was a grumpy husband! He loved playing poker with the “USOP boys” complaining about Craig’s good luck and late email notices, but looking forward to these Friday nights so much that he refused to move down south full-time just so he could participate. John loved baking his family’s traditional cinnamon rolls at Christmas always layering pounds of extra brown sugar and cinnamon and rolling them thin. If he was in the Livermore office, he often baked cupcakes with homemade frosting, and his famous peanut butter cookies. He enjoyed playing golf with Jim and Ted annually and actually won the last round, watching old black and white movies and TV shows such as Gilligan’s Island, The Monkeys, The Rifleman, Bonanza, Get Smart, and the Brady Bunch. He was definitely born in the wrong era! We watched Hallmark Christmas movies in June, and, of course, the Bachelor. John had a collection of over 20,000 songs on his IPod ranging from “semi”-popular tunes to 60s folk to country.

If you were fortunate enough to know John, you knew you had a friend for life. In fact, he boasted that he met his two best friends in middle school. John had a quick wit, was lightening-fast at mental mathematics, loved analytical detail – tracking his bike miles, The Bachelor statistics, budgets, retirement fund, as well as his (and Lisa’s) automobile mpg. He deeply cared about the people in his life. If you needed his help, he never wavered to assist in any way he could. John loved driving his Mercedes with the top down, an old song on the radio, and headed towards Lake Tahoe for a gambling trip. That was his idea of heaven! His fun-loving personality, quirky sense of humor, and overall presence will be sorely missed.

In lieu of flowers, the family requests memorial donations to be made to the following organizations that John supported:

AIDS/LifeCycle
AIDS/LifeCycle 2017: Mr. Tom D. Frady – AIDS/LifeCycle
www.tofighthiv.org/site/TR/Events/AIDSLifeCycleCenter?px=1279302&pg=personal&fr_id=1990
(please note in the comments section that you are donating in memory of John Popper)

Condolences and stories may be left on John Popper’s online guest book at
https://www.oconnormortuary.com/obituaries/John-Popper-2/.