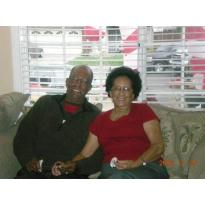 John Kennedy Sr. age 90 of Laguna Woods, CA died Sunday, April 19, 2009 with his beloved family by his side. He is survived by his wife Rebbie Kennedy, son John Kennedy Jr., wife Catherine, son Keith Kennedy, wife Brenda and 6 grandchildren, Karen, Andrew, Jovani, Johnathan, Jeremiah and Johnna.  John raised his family in Santa Ana, CA and worked as a Plasterer in Orange County for more than 50 years.

John Kennedy, Sr. arrived in California alone, in 1934, at the age of fifteen. The first job he found was shining shoes. He worked in the produce section at the central market in Downtown Los Angeles. From 1935-1942 he lived in Los Angeles and Pasadena. In 1942, he moved to Forest Avenue in Laguna Beach, Orange County.

When Pearl Harbor was bombed in December 1941 he and five of his friends tried to enlist but Dad was rejected as 4-F due to perforated eardrums. Dad was unable to serve his country as a soldier; instead he served as a civilian. He worked on the construction projects at the El Toro Marine Corps Air Station in El Toro, the Army Air Corps recruiting and training facility in Costa Mesa and the LTA Lighter Than Air Base in Tustin.

With the end of WWII, our Dad saw the Orange County population expanding and in great need of housing. With construction booming, he joined the Plasters Local 489 in 1951. He enjoyed taking his family to see many of the places that he worked on and it made us all feel a part of his work. Our Dad worked on such notable projects as the Fluor Corporation complex off of the 405 Freeway, the student housing at the University of California, Irvine, and the Orange County courthouse. When the housing and construction market started to slow down in the early 1980’s, Dad started a second career working for Disneyland in the staff shop. There he got to work on the new Thunder Mountain Railroad, the Matterhorn, and Jungle Cruise. He retired from Disneyland but always enjoyed going back with his children and grandchildren.

Dad was in his thirties when he met the love of his life, Rebbie Miller on a blind date. When she consented to marry him, he was 35 and with their marriage, he gained a wife, a best friend and a loving extended family. Dad and Mom lived in Long Beach for three years until they bought their first home in Santa Ana. Dad recognized there was a lack of after school recreational opportunities for young men in the neighborhood, he turned his garage into a mini-gym and provided advice on how to stay out of trouble to the young men. Dad was a loving husband and father and a wonderful provider to his little family. Since he worked construction, there were rainy days where he would stay home. It was then that he honed his culinary skills. His specialties included the ‘secret’ Kennedy barbeque ribs, Pepper Steak, Shanghai ribs and Hog Head Cheese. Dad kept his yard meticulous, his cars clean and his wife happy.

Dad’s strong belief in family led him to make certain that his wife and children were always number one in his life. He was an avid camper and fisherman and when he built his boat in 1963 he christened it Rebbie. As his sons, we went on every trip as his shipmates. He reinforced in us a respect for the ocean and taught us all boating laws. As a family, we spent many weekends at the Imperial Dam on the Colorado River or at the Salton Sea fishing for catfish, tilapia, or perch. When our family was not on the River, we were fishing the ocean for Rock Cod, Bonita, or whatever was running that day. We had many great adventures with Dad including the time that we were circled by sharks longer than the boat was wide and on another occasion, when coming out of a fog bank, we came within a hundred feet of a US Navy aircraft carrier.

Dad’s 90 years allowed him to see many changes in the world. He endured the depression, the advent and the abolition of prohibition, the advent and repeal of Jim Crow laws and the passing of the Civil Rights Amendment. The day that this Amendment was signed our family happened to be at a drive-in restaurant in Texas. We had to wait until after noon to be served as the management was waiting to see it signed by the President. Dad never held grudges. He had friends and all races and nationalities. He was however very happy that in the very last election he would be able to participate in, he was able to cast a vote for our first black president.