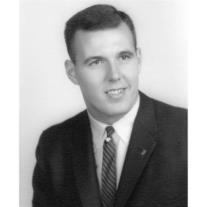 John Joseph Mika Jr., 76, of Coto de Caza, CA passed away March 17th, 2015. He was born September 11, 1938 in Bethlehem, PA. He was the son of late Anna and John Joseph Mika Sr. He grew up as an only child and graduated from Bethlehem High School in 1956. He then entered the University of Pennsylvania in the fall of 1956. While in high school, John was a member of the varsity Football, basketball and baseball team.

After graduation, John married Patricia Mary Dunn on October 8th, 1960. John and Patricia moved from Philadelphia, PA to Richmond, VA where John worked for Getty Oil Company. After many years of hard work and dedication, John was promoted to an executive position as a Vice President. He worked for Getty Oil Company for 20 years and then worked for a new company in California called Santa Fe International. He worked for them as well for 20 years where he served as a Vice President. He later retired in Plano, TX at age 62.

John and Patricia later came back to California to be closer to their children, Judith Lafont and John Mika III and their 5 grandsons: Zachary and Alexander Taylor and Alec, Evan and Dean Mika. They were married for 55 years. In his retirement years, John enjoyed traveling, golfing, reading books, doing crossword puzzles, playing poker and watching his grandsons in high school plays and sports.

John was a devoted Catholic and went to mass every Sunday. He was a member of the Stephen Ministry. He will be missed by his family.