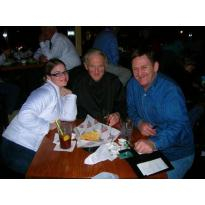 Private viewing and rosary to be said at O’Connor Mortuary in Laguna Hills on Wednesday November 3, 2010 at 7:00 pm.

John, the son of Irish immigrants, was a self-made engineer who owned and operated California Cutting Tools with his wife of 45 years, Irene Fitzsimmons, who passed away on November 21, 1994.

John served his country with great pride in World War II as a Communications Officer in the Merchant Marines. He later wed the love of his life on November 11, 1949. Together, Irene and John lovingly raised their two children and shared many happy decades of joyous marriage.

John is known among those who love him, those who have known him and all those who have crossed his path as a man of great charisma and character; a man with the adept ability to tell a story and illicit laughter in the manner known and mastered by the Irish. He was an avid reader, writer and traveler, a lover of culture, education, language, art and family.

John’s life, encompassed by the grand stories that swell in our memories, the wisdom he has imparted, the great love he offered, and the determined will be passed down through the generations, will live on through time in the hands of those who have held his own as he departs us now in the same grace with which he lived.

We Love you, Johnny. God Speed.

Condolences may be sent to O’Connor Mortuary in Laguna Hills.