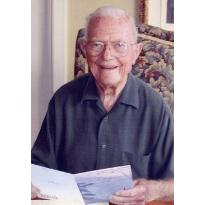 John moved to Los Angeles in 1929. He graduated from University High, attended UCLA for three years and graduated from UC Berkeley in 1941. He volunteered for the army in July 1941 and attended Signal Corps OCS at Ft. Monmouth, N.J., where he was commissioned a 2nd lieutenant. John served in Foggia, Italy during WWII. He was discharged as a Major from the Air Force Reserves in 1952.

The family settled in West L.A. after the war, and John joined the American Legion, serving as Commander of Post #46, Culver City. He was a member and Past Master of Ocean Park Masonic Lodge and Past President of both the High Twelve Club and the Santa Monica Bay Shriners. He retired from John Hancock Insurance Co. in 1982. John and Beverly moved to Orange County in 1995. He joined the Saddleback Masonic Lodge and American Legion Post #257 in Laguna Woods.