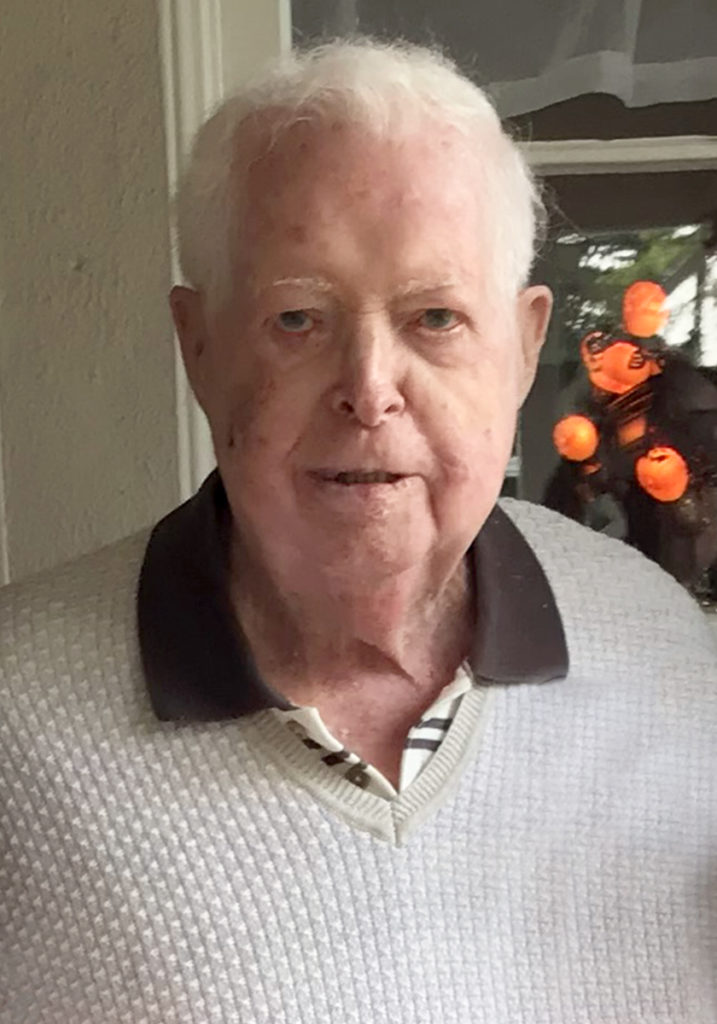 Jack (John Russell) Mills was born February 17, 1931 in Hollywood, California. As an only child, he was raised in Alhambra, California where he lived from birth thru high school with his parents John Leslie Mills and Janet McLeod (Russell) Mills.

After graduating high school, he was employed by United California Bank, later known as First Interstate Bank. After stretching the truth in his first job interview that he could type when he couldn’t, he was hired as a bank teller in Norwalk, CA. Over the years, he continued to move up to Assistant Manager and Manager in various branches. Eventually, he ended up working in Santa Ana as Director of Personnel of Branch Managers for Orange and San Diego Counties. Prior to retiring at age 62 with a lifetime career in banking, he returned to serving as Branch Manager in Corona del Mar. Jack extended his banking skills to helping his daughters with math homework, keeping score at softball games and serving as Treasurer for Saint James Presbyterian Church in San Gabriel and the Kiwanis Club of Corona Del Mar.

Jack enjoyed playing golf with his wife Joyce, work associates, friends and family members. He enjoyed bowling and playing in leagues. Jack liked playing card games such as Poker, Black Jack and Cribbage. He liked watching and listening to comedians Jonathan Winters, Don Rickles, Bob Newhart, Dean Martin, Smothers Brothers, Laugh-In’s Rowan & Martin and Johnnie Carson (who people said Jack resembled in his 40’s).  He enjoyed listening to folk music with favorites Peter, Paul & Mary, The Limelighters, The Kingston Trio, Bob Dylan and The Traveling Wilburys. Jack loved watching a variety of sports on TV. He was an avid Fantasy Football participant which he finally won in January 2021. He loved reading Western, Detective, Spy and Espionage novels that he regularly checked out from the Public Library. He got a kick out of Sean Connery (whom he called Sean Connerly). He enjoyed watching James Bond, Mission Impossible, Jason Bourne, Western and Military war movies. Jack’s favorite spots to vacation with family were Crestline, Lake Tahoe, and trips to the family farm in Missouri.  He loved visiting and spending time with family. Throughout many years, he attended children’s and grandchildren’s events for school, sports, performances and other monumental moments such as birthdays, graduations, marriages and baptisms.

Jack Mills was blessed to be at home upon his death as he entered his new eternal home. He was successful in making it to his 90th birthday the day before his passing, which he was determined to do. Jack was fortunate to be supported, visited, and surrounded by his wife and immediate family members. He will be missed greatly and remembered with love, appreciation and fond memories by all who knew him.

In lieu of flowers, donations in Jack’s name can be made to the
Kiwanis Club of Newport Beach/Corona Del Mar