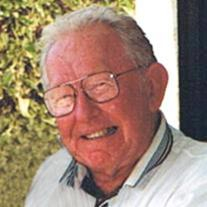 John Francis Alberg passed away May 16, 2012. On April 24th, 1926 Jack was born in Hollywood, CA to Mary (Cuddy) Alberg and Nels E. Alberg. He had an older brother, Robert Alberg. Known as Jack throughout his life, he was raised in Hollywood, CA, where he attended Blessed Sacrament School and Loyola High School. Upon graduating from high school, Jack served in the Army in World War II. After the war, he attended Loyola University and began his career as chemical engineer in the oil industry. He was married to his first wife, Judith Fisher Alberg, for 24 years before Judy passed away. They had three children together.

Jack is survived by his loving wife Margot; they shared 38 joy-filled years in each other’s company. Together, they blended a family of ten children all of whom survive Jack; they (and their spouses) are: Bob (Patty), Carol (Ron), Donald (Jeanne), Karen (Mark), Mike (Diane), Tony (Laura), Paul (Jacque), David (Raeni), Mary (Kelly), and Kevin (Alma), 22 grandchildren, and 7 great-grandchildren.

Jack was also a man of who had many friends, and will be missed by all those who were fortunate to be touched by his life.

A memorial Catholic Mass in celebration of his life will be held Monday, May 21 at 10:00 a.m. at Santiago De Compostela Catholic Church, 21682 Lake Forest Drive, Lake Forest.

In lieu of flowers, the family requests donations in honor of John Francis Alberg be made to the American Cancer Society.