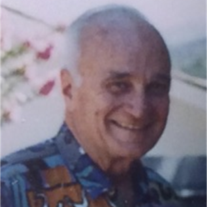 John was born on a farm in Sorgho, Kentucky on May 20, 1925 to parents Mary Katherine Bitttel and James Clements. He was preceded in his death by his devoted wife Marta and his loving brothers Robert, James and sisters Mary, Irene and Lillian.

Upon completion of high school, John served his country in World War 11. After his return he enrolled in college with support of the GI bill and his brothers who were determined to ensure a “Clements was educated”. John often said that all his siblings had the capacity but he was afforded the opportunity of a college eduction. Because of this, all of his children have a college degree and his grandchildren are currently completing their college degrees.

John graduated with a Bachelor of Engineering (B.E) from the University of Southern California in 1954. . He relocated to Camden, New Jersey to work at RCA on the development of television technology and international telecommunications. He married Myrtle “Marta” Dickinson on May 4, 1956 and they resided in Cherry Hill, New Jersey where all four of his children were born. John moved to Almaden Valley, California with his family in 1973 where he worked at Aydin Systems Division. He formed many great friendships while his children swam for Almaden Valley Swim and Racquet Club. On most weekends, John could be found timing the swim meets.

John was also an skilled bowler and enjoyed his weekly men’s night out.

John retired as the Sr. VP, Program Management/Operations from Aydin in 1995 and relocated to San Clemente, CA. He and his wife enjoyed their wonderful new friends and many social events in their community. Over the next 15 years , John and his wife partook in many cruises visiting various parts of the world.

John was the happiest when surrounded by his loving devoted wife and family.