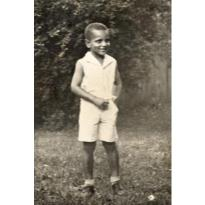 Jack Baugh, born John Gordon Baugh IV was born to Virginia Alsop and John Gordon Baugh III on May 19, 1929, in Germantown, Pennsylvania. Jack was a gentle, caring man with a strong faith in God. He went to be with the Lord on Thursday, July 28, 2011.

Jack married the love of his life Barbara Ardis Goore on March 26, 1949. He dedicated his life to her. Adventures such as camping, travel, and exploration were a frequent part of their summers and weekends. Jack and Bobbie camped in all 48 of the 50 states and in many provinces in Canada. They also traveled extensively with elderhostels and cruises covering all seven continents.

Education was extremely important to Jack. After obtaining his formal education in the public schools in Philadelphia, he continued his education receiving degrees in both electrical and mechanical engineering. A masters and doctorate degrees were also earned in business management.

Jack loved serving the church and served at the national level on various committees. He also loved serving his community. He found true pleasure in acting in various plays in the church as well as with the Footlighters at Regents Point.

Many honors and awards were bestowed upon Jack Baugh throughout his many years of service at Hughes Aircraft. One honor he was truly proud of was designing the landing guidance portion of the Surveyor 1 Spacecraft that helped guide the soft landing of the satellite on the moon. This piece of equipment is now located at Smithsonian Institution National Museum in Washington DC.

He will be forever missed, and forever in our hearts.