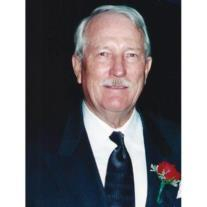 John F. Gulledge II, 78, from Coto de Caza, CA passed away on November 25th, 2015, from complications of Parkinson’s disease and Lewy body dementia. He is survived by his loving wife, Pili; his mother-in-law, Consuelo (aka, Lala); his daughter, Jennifer; his six sons, Karl, John III (and wife, Trish), Alex (and wife, Gretchen), Aaryn (and wife, Vannesa), Reuben (and girlfriend, Courtney), and Andrew (and wife, Leslie); and six grandchildren. John was also very close to his nephew, Elias (and wife, Lori), and their three children. He will be missed greatly by all for his kindness, easy sense of humor, loyalty, and honorability.

John was born on August 21st, 1937, to Joseph and Faye Gulledge in Siloam Springs, AR, and grew up in Salisaw, OK. His academic and athletic accomplishments in high school paved the way for him to be invited into the very first class of the Air Force Academy. While at the Academy, John made many lifetime friends, started on the Cotton Bowl winning team, and began his noble military service. After graduating in 1959, John flew in Korea and Vietnam, achieving the rank of Captain before leaving honorably for a career in commercial aviation. He served Western and Delta Airlines as navigator, copilot, captain, and instructor for over 28 years before retiring in 1997.

John Gulledge was much more than a military and commercial pilot in his long, fruitful, and fulfilling life. He was a loving and caring husband and best friend to Pili for 27 wonderful years, a supportive father and role model for his six boys, and a kind and generous husband to their mother, Mali. He served as coach, referee, and #1 fan for all of his children, both on and off the athletic fields, instilling in them the importance of sportsmanship and fairness. He spent much of his free time traveling with and to friends and family across the country because they meant so much to him. One of John’s favorite activities was watching football with his family, especially Steelers’ games, while sipping a beer or Scotch. His home was often a gathering place for friends, family, great food, and even better times.

Memorial services for John Gulledge were held on Tuesday, December 1, 2015 at the Coto de Caza Country Club. John’s ashes will be interred at the Air Force Academy in January, 2016. Contact Pili (pili@piligulledge.com) or Alex (alexander.gulledge@skywest.com) for details. John’s smile, kindness, and genuine friendship will last in the hearts of everyone who knew him.

“Off we go into the wild blue yonder, climbing high into the sun..”