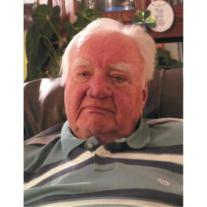 John Francis O’Halloran celebrated his 90th birthday with his loving wife of 34 years and his children just seven days prior to being called home to Jesus.

John was born in Chicago on October 19, 1922 to the parents of Bernard and Nellie O’Halloran. He is the youngest of three children.

A life long Catholic, John attended St. Mel High School and graduated in 1940. He then went on to Northwestern University and graduated in 1944 with a B.S. in Electrical Engineering. In 1946 John was released from the Navy and joined the Radiation Laboratory at the University of California as an Electrical Engineer. In 1949 he joined Neely Enterprise as a Sales Engineer, selling sophisticated electronics. In 1957 he started his own company, O’Halloran Associates, an Electronic Manufacturers Representative. Over the 48 year life span of his company he represented the top names in the industry earning a renowned reputation for professional service. During his life John has been involved in charities such as Big Brothers. He was a 4th degree Knight of Columbus and he spent his last 14th years as a Dana Point resident. He was a keen student of people, American politics and Wall Street. His hobbies included flying, sailing and world travel with his wife. He was particularly partial to the Hawaiian Islands.

He is preceded in death by his 1st born son and name sake, John Francis O’Halloran II. He is survived by his wife Patricia and his children Carol Trahan, Cathy Jackson, Mary O’Halloran, Patricia Abruzzo, James O’Halloran and Ann Marchetti and two stepchildren Stacey Jurgenson and Ronald Faass. He has twenty grandchildren, six great-grandchildren and numerous nieces and nephews.

In lieu of flowers the family is asking that donations be made to the Alzheimer’s Association, www.alz.org