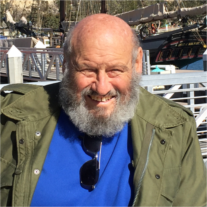 Born in Los Angeles, Fred lived a larger than life role, bringing joy to everyone he met. He knew no strangers.  His intelligence and wit were staggering – he spoke seven languages, had vast encyclopedic knowledge of diverse subjects from science to history, and always won at Jeopardy. Educated at St. Francis Assisi and 3 & 4th grades at St. Charles Borromeo, Loyola High School and University, he attended dental school at Creighton University in Omaha where he met the love of his life, Anne. They celebrated 54 years of devoted marriage.

He was a prominent and beloved dentist in San Clemente whose dedicated patients praised his painless, beautiful work completed during recitation of non-stop jokes. Fred was immensely proud of his 43 years of continuous military service, first as a naval officer and Vietnam Veteran and later in the Army Reserves. He developed profound, life-long friendships which sustained him. He took pride in his Lebanese heritage and looked forward to his weekly luncheon meetings with the Loafers.  Intensely curious, he loved to read, travel and spoke daily with his family to stay connected with their lives. He was kind and generous, always genuinely interested in how he could help and mentor others.

Fred is survived by his wife, Anne; sister, Annette Debs, CSJ and brother, Ralph Debs; son, Tony and daughter-in-law, Lillian Soohoo; daughter, Julianna and son-in-law, Daniel Purner; and seven granddaughters and one great-grandson. We will all miss his vivacious presence.

In lieu of flowers please consider a donation to: