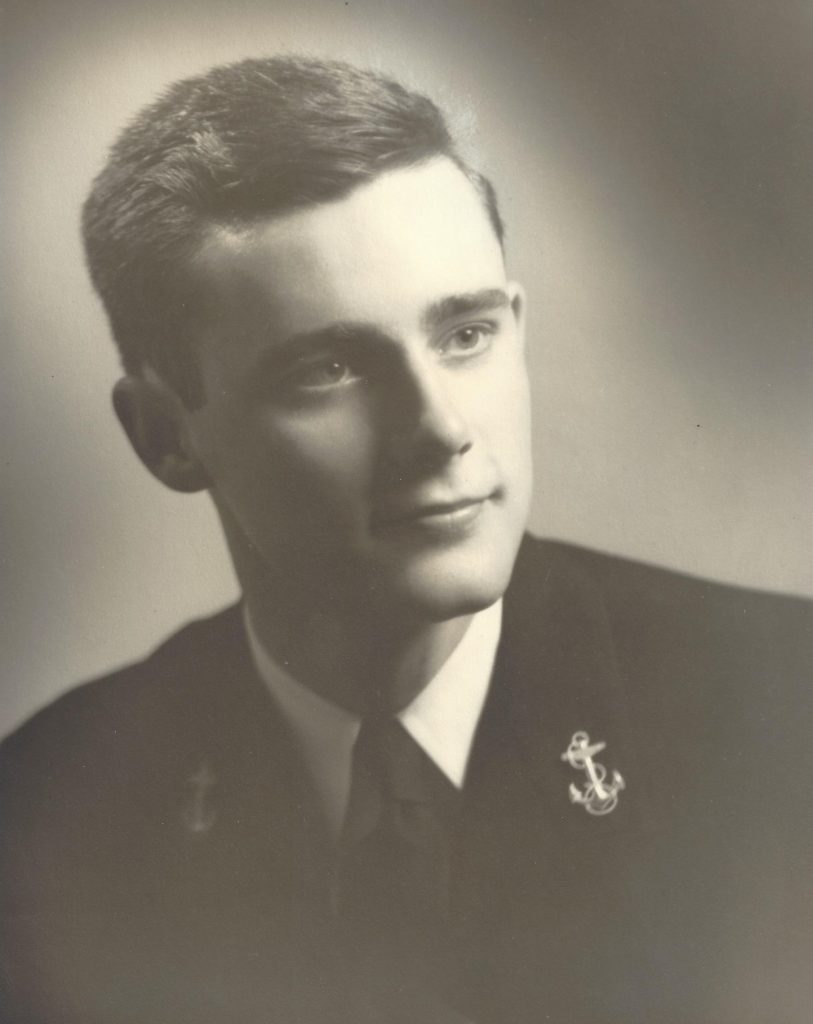 John Emery (Jack) Wagner, 92, passed away peacefully on April 2, 2019 at his home in Rancho Santa Margarita, California following a brief illness.  In the preceding days, he was surrounded by many well-wishers and members of his large family.

Jack was born in Sioux Falls, South Dakota on September 19, 1926 to John Francis Wagner and Estelle Genevieve Wagner (née Walsh).  Jack was an only child.  Even though his parents showered him with love and affection, Jack lamented not having a larger family with brothers and sisters as playmates.  When Jack was still a young boy, the family moved from South Dakota to Mason City, Iowa where Jack’s father – also known as Jack – was employed as a meat salesman for Swift & Company.

Jack attended Mason City High School and was involved in many extra-curricular activities.  After the United States entered World War II, Jack was selected for the V-12 Navy College Training Program.  He graduated High School in 1944 and entered the Navy while, at the same time, attending Iowa State University in Ames, Iowa.  Jack was the first in his family to attend college.  At Iowa State, he studied engineering and was a member of Phi Kappa Psi Fraternity.  Upon graduation from Iowa State, Jack received his commission as a Lieutenant JG. He was immediately assigned to active duty, serving on both the USS Midway and the USS Iowa.

Jack fulfilled his active duty commitment to the Navy and, with the help of the GI bill, attended the University of Iowa School of Law.  He continued to serve in the Navy Reserves, assigned to Naval Intelligence.  While attending Law School, Jack met Mary Elizabeth (Betty) Thompson and they fell in love.  After being awarded their respective degrees, Jack and Betty were married on November 10, 1951 at All Saints Catholic Church in Cedar Rapids, Iowa.  The couple immediately moved to the East Coast where Jack had accepted a position as a Patent Attorney at Bell Laboratories in New Jersey.

While at Bell Labs, Jack worked with some of the most innovative minds of the Twentieth Century and helped procure many ground-breaking patents, including the first push-button telephone.  At the same time, Jack and Betty created a busy home life with six children in seven years.  In 1959, the West Coast’s nearly perfect weather, its growing technology sector, and its unparalleled system of colleges and universities, lured Jack and family to Southern California, where he accepted a position as Patent Counsel at Bendix Corporation.  Five more children followed, bringing the total number to eleven – six girls and five boys. The large family eventually settled in Glendale, California.

After stints as Patent Counsel for Bendix, Aerojet, and Space General Corporations, Jack opened his own law office in Pasadena.  At first, he handled many different types of matters, including business transactions, litigation, and probate.  Soon enough, though, Jack’s patent expertise attracted a broad array of mostly small and medium-sized patent clients.  Throughout his career, Jack particularly enjoyed helping the small “garage” inventor transform a great idea into a commercially viable product or technology.  When a large company tried to steal patented technology from one of his clients, Jack fought back with the help of litigation counsel to win a jury verdict which, up to that time, was the largest patent infringement jury verdict in history.  This happened, not once, but twice, for two of Jack’s clients.

Besides working as a patent lawyer, Jack filled his life with many other interests and passions – both professional and personal.  For ten years he taught business law at UCLA in the Engineering Executive Program, a special graduate program for successful practicing engineering managers.  He was retained numerous times during his more than 50-year legal career to testify as an expert witness in the area of patent law. At 50, Jack decided to get his pilot’s license and purchased a Cessna 172 aircraft.  This small plane became his weekend passion for decades until, a few years ago, he donated it to the University of Iowa where it is being used for “human factors” research.  He was active in the Boy Scouts of America and served as the President of the Verdugo Hills Council in Glendale.  He was later honored by the Verdugo Hills Council with its lifetime achievement award – the Silver Beaver.

In retirement, Jack continued to fly his plane and travel extensively with Betty.  All the while, he maintained a passion for new ideas and technologies.  Even after downsizing and moving with Betty to Orange County in 2014, Jack was always working on a “critical project” or preparing for his next adventure with Betty.  Just a couple years ago – at 89 – Jack led Betty and a group of eight other family members on an expedition to visit Betty’s ancestral home in Suffolk, England and to search for artifacts from the Roman occupation of Britain 2000 years ago (seriously).  A mere five months ago, he joined 30 other World War II Veterans on an “Honor Flight” to visit many of the important military sites in Washington D.C.  Quite simply, Jack’s love of learning never diminished.  With humble beginnings as an only child from Mason City, Iowa, Jack forged a remarkable life marked by innovation and ideas, but tempered by love of God and family.  His legacy can be found is all those whose lives he touched.

Services will be held on Friday April 12, 2019, at Holy Trinity Catholic Church in Ladera Ranch, California.  A Rosary and brief Visitation will commence at 9:30 a.m. followed immediately by a Funeral Mass.  A reception in Huntington Beach will be held afterwards.  The family will hold a private interment at Good Shepherd Catholic Cemetery in Huntington Beach, where Betty was laid to rest 15 months ago.