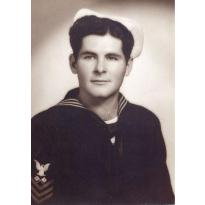 Jack died peacefully at home, of sudden cardiac arrest, on his 85th birthday, February 12th, after several years of having end stage kidney disease. He was born in Los Angeles to Mary Kathryn Hughes and Michael Joseph Hughes. Jack had three older siblings, Jean Elizabeth now 93 and living in Spokane, Washington, Patricia Mary and George Michael who are both deceased. Ten weeks after our country entered WWII in December, 1941, Jack turned 17and left high school to enlist in the Navy for four years. He served first on a troop transport ship and then became a signalman on a sub chaser in the Pacific Theater. His ship engaged in many conflicts, including those to free the Philippine Islands. In calmer times on ship, he took courses to earn his G.E.D. When the war ended, he served the rest of his ‘hitch’ as a Shore Patrol Officer.

Upon his return home in 1946, Jack married Mary Gill, whose family lived on the same block in their neighborhood. They became the proud parents of three children, John Gill, James Michael and Donna Elizabeth. During most of their marriage, they resided in Westchester, where the children were active in sports and Jack was a Little League baseball coach.

After getting his G.E.D., Jack became a Los Angeles police officer, while attending USC part-time. He was an avid fan of the Trojans. He rose to the position of Sergeant and retired after 20 years on the force. For several years after that, he was Safety and Security Director for Newberry Department Stores. Then for 18 years, he held that position at Kaiser Permanente covering all their facilities in Southern California.

After his marriage to Mary ended, Jack married Paddy Bradford in 1971. She was born in Australia and they made many trips there, to Ireland and other parts of Europe. They lived in Laguna Niguel and San Clemente before moving to Portland, Oregon, in 1993. Paddy died in 1997, after a long illness. He had a close relationship for almost 40 years with her children, Victoria, Verah and Jon.

In 1998, Jack married Laura Eaton, the widow of a Navy veteran who had died of sudden cardiac arrest in 1996. Her daughters, Linda and Laurie, were happy to become part of Jack’s extended family. For two years, Laura and Jack remained in Oregon, but in 2000 they moved to Laguna Woods Village, formerly Leisure World where Jack took up golf. After a year or so, he began to win many tournaments. Laura & Jack celebrated their 12th anniversary a week before he died.

In the past few years, Jack was a frequent patient at Kaiser’s clinics, emergency rooms and hospitals, where he received excellent care from his nephrologist, other physicians and surgeons. Many of the compassionate nurses he had were from the Philippines and enjoyed hearing about the part Jack played in their country’s history.

Jack was warm and easy-going with a great sense of humor. In spite of his health problems, he was always upbeat. He was very conscientious about following the advice of his doctors because he wanted to continue enjoying life. He was much loved and will be greatly missed by all his family, friends, neighbors and fellow golfers.

In lieu of flowers, the family requests donations to the National Kidney Foundation or the American Heart Association.