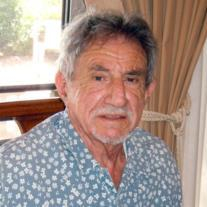 The man known to many in our community of Laguna Beach as “Mr. Giovanni,” John Carmen Mancuso, began his life in Hastings, Pennsylvania on 6 November 1932. His parents, Michele Mancuso and Carmela Todaro, immigrated to the United States at the turn of the century from Grotte, Sicily. He was the eighth of nine children.

After graduating from high school, he enlisted in the U.S. Army during the Korean War. There, he served as a communications operator for two years. Upon his return to the states, he and his family moved, first to Oceanside, California, and then to Los Angeles where he met his wife, Mary Jo Hasenbank. The couple eventually settled in Gardena, California.

After earning an A.A. at L.A. City College, he embarked on the first of his many business ventures, as a purveyor of poultry and seafood at Evergreen Poultry in Los Angeles.

In January of 1969, he and his wife Mary Jo opened Giovanni Italian Delicacies in North Laguna. They earned a reputation for serving high quality, affordable Southern Italian comfort food, including pizza, sandwiches, and pasta. Most people who remember Giovanni’s think immediately of mini-subs, beef dips, or meatball sandwiches. However, the sandwiches were only the “tip of the iceberg.” Giovanni’s pizza and pasta sauces were the stuff of legend. In addition, there were imported Italian groceries, a full-service deli, and a catering menu.

Even more important to the community, however, many of the young men and women attending school at Laguna Beach High in the seventies found their first jobs at Giovanni’s. Those kids were more than employees; they became members of the Giovanni family.

The location on North Coast Highway remained open until December of 1978. Soon after, John Mancuso opened a newer incarnation of Giovanni’s on Broadway Avenue near Main Beach. Giovanni’s, a Laguna Beach institution, closed its doors forever in 31 December 1985.

Until his retirement in 2002, John was a distributor and facilitator for the Southern California Lottery. He loved painting, jazz music, and all things Italian. His life-long passion for food and cooking never diminished. In his final days, he was in the kitchen puttering with a new grinder for cheese and meats.

After a long bout with cancer, John Mancuso died in his Laguna home on 14 January 2015. He leaves behind a heartbroken and grieving family. He is survived by his wife, Mary Jo Mancuso. He is also survived by his four daughters and their families: Margaret Mancuso and her partner Robert Millard, Stephanie Andrews and her husband Douglas “Skip” Andrews, Susan Bartsch and her husband Joel Bartsch, and Joan Mancuso. John Mancuso leaves six grandchildren: Jami Patrice Andrews, Tristan Alexander Bartsch, Ashley Ann Andrews, Margaret “Markie” Elaine Hughes, Caitlin Michaela Bartsch, and Kyle Chandler Bartsch.

Services will be held at St. Catherine of Siena Church in Laguna Beach. In lieu of flowers, donations can be made to The Wounded Warrior Project.

Everyone who knew John Mancuso loved him. He had a wicked sense of humor and a heart of gold. He will be remembered and missed by many.