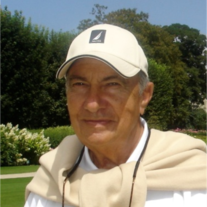 Joel was predeceased by his parents and his sister Marilyn D’Alessandro. He will be missed by many nieces, nephews and his sister-in-law Mary Ann Connors and her husband Maury.

Joel’s death was caused by the effects of Lewy Body Dementia which had stricken him four years ago.

Joel grew up in the Bronx and Mt. Vernon, New York, graduated from Westchester College in Valhalla, New York and served in the US Navy during the Korean War. He worked for Hess Oil, the Hertz Corporation and Chemical Bank in New York before relocating to Orange County to work for Taco Bell in 1982. He ended his career as a Conroy’s Flower Shop franchise owner. He and Elaine traveled extensively and enjoyed skiing, golf, good times with friends and, of course, lots and lots of fun adventures with their grandchildren.